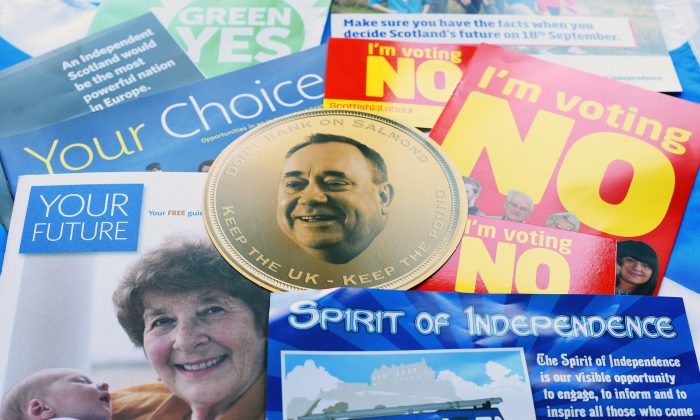 The latest figures from polling site Yougov.co.uk shows Scottish voters in favor of staying with the UK at a 4 percent lead.

This is a shift from the last polling results in early September giving the “yes” camp a slight lead over the “no” camp, “yes” being for Scottish independence and “no” for staying with the UK.

If British Prime Minister David Cameron had known it would get this close, he might not have been so quick to offer Scotland the chance to decide its own future two years ago. The surge in support for an autonomous state of Scotland has caught many by surprise, and has sent the prime minister and other politicians to Scotland to try drum up support for remaining a union.

It sounds much more positive to be for “yes” than it does to be for “no.” Maybe this is why the “yes” vote has become so popular after 300 years of unity with Britain.

While many Scots would say “yes” to the many positive aspects of independence from the UK, would they say “yes” to losing the pound? To creating a barrier with their biggest trading partner? To losing membership in the EU, NATO, and the UN? To losing the ability to so easily study, work, or travel in the UK?

These and other considerations are what have kept the “no” campaign so popular for so long—there is no clear roadmap for what lies ahead if Scots vote to secede.

Ian Duncan, a Scottish member of the European Parliament who is in favor of Scotland staying in the UK, said, “We have seen our pound … being devalued, we have seen billions wiped off the value of Scottish companies because the results look closer than we would all like.”

“The real danger for us now is that we will live in an impoverished country unless we are able to ensure a sensible and sure vote to support the United Kingdom.”

He said the lies and the half-truths coming from the “yes” camp are creating a false sense of security about what would happen if Scotland were to become independent.

Scottish businessman Brendan J. Burns said, “Irrespective of the vote, Scotland wins.” Burns said in Brussels on Thursday he was undecided how he would vote. “I think it’s going to be so close that it will give an opportunity to re-look at how the United Kingdom actually operates,” he said.

Whoever wins, it is clear that those in favor of Scottish independence have gained concessions from Westminster.

At a dinner for the Confederation of British Industry (CBI) in late August, Cameron said he would give greater powers to the Scottish government and would do it “very soon” if the result was a “no” vote, according to a BBC report.

“But if they don’t do it properly, then in six years time, this will occur all over again,” Burns predicted.

Regardless of the vote, the issue is not likely to be taken off the table.

The question Scots face right now is, “Do you want to be independent of the UK?” The question is all or nothing. But that could change if Scotland votes to stay with the UK.

Depending on the results of the referendum, that question may change to “Do you want maximum devolution?”

British Member of the European Parliament Charles Tannock said on Thursday: “If there is even a small majority of a ‘no,’ which I hope will be the case, it doesn’t kill the story … because the margin will be very small so the losing side will not really accept the results as stopping the debate.”

The vote will take place on September 18.