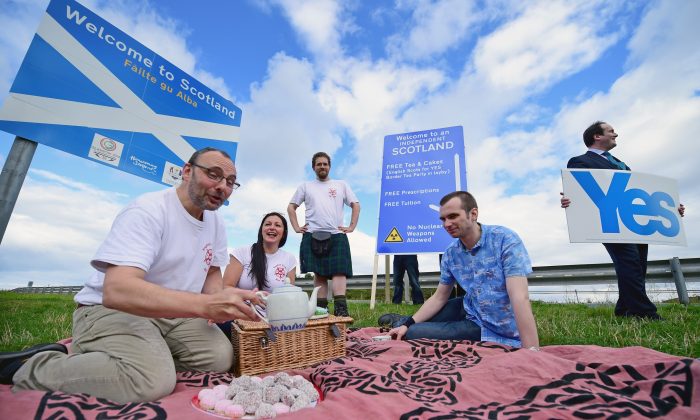 Members of English Scots for Yes hold a border tea party, to celebrate the continuing open border between Scotland and England after a possible “Yes” vote in the Scottish Independence referendum in Berwick Upon Tweed, England, on Sept. 7. (Jeff J Mitchell/Getty Images)
News

BIRMINGHAM, England—Suddenly, it was real. The future of the United Kingdom was in doubt. Ten days from the Scottish independence vote an unexpected poll surge showed the race was neck and neck.

As the British political leadership rushed to Scotland, so did foreign journalists, suddenly faced with unpicking the confusion surrounding the United Kingdom for their audiences. What exactly is Britain? What is England? Aren’t the English just the British? You mean Scotland already has a government?

“The English are now thinking about what it is to be English, rather than what it is to be British,” said Andrew Mycock, a senior lecturer in politics at the University of Huddersfield, who specializes in British identity.

“There is a sharper sense of Scottish nationality identity because it is a smaller nation,” Mycock said in a telephone interview. “Whereas Englishness is far more diffuse, and it’s always been far more connected to this overarching sense of Britishness.”

The United Kingdom of Great Britain (U.K.) comprises four countries. Wales, Northern Ireland, and Scotland have created their own parliaments within the last decade and a half, with limited powers. But England has no parliament, controlled entirely by the London Parliament that governs the union as a whole.

That lack of separate English representation is increasingly hard to justify with Scotland’s ever-growing hunger for independent powers.

On Thursday, Scots will vote in a binding referendum on whether Scotland should become a fully independent nation. If they vote to stay, they have been promised additional powers.

“What has happened in Scotland particularly in the last six months is starting to sharpen that sense of Englishness in a political sense. Partially through grievance; the sense that the Scottish are getting something exceptional, that they are being afforded greater political rights than people in England are getting,” Mycock said.

He points to a survey in 2012, which showed that the growth of separate Scottish, Welsh, and Northern Irish powers had kindled a growing sense of Englishness and a growing demand for political representation of English issues.

The Center of England

You would drive straight through the village of Meriden, and never know its 500-year-old claim as the geographical heart of England, unless you spotted the wording, just a few inches high, that declares it, “Centre of England.” There is no flag, no bunting. Just a tired-looking secondhand furniture shop obscurely titled ‘The Centre.’

The possibility that the United Kingdom could split has hardly registered with some in Meriden. Some don’t care. Some are bullish. Some would be truly sorry to see the Scots go.

Carl Ives owns Meriden’s secondhand car dealership. His concern is that a split might upset the economic recovery. “It’s bound to cause financial uncertainty in the markets, which affect everybody,” he said. He is hopeful that the Scots will “see sense,” and stay in the union.

In the conversations in the butcher’s, the pharmacy, hairdressers, Post Office, and the corner shop, the views are mixed. But pressed on the matter of culture, the response is more uniform: they exchange glances, shrug, and simply can’t articulate any idea of either Scottish or English national identity.

“Just because the English sense of identity can’t be clearly articulated doesn’t mean it’s not there,” said Jo Carruthers, a lecturer at the University of Lancaster with a research Interest in Englishness. “Because they’ve often wielded the greatest apparent power, the English, or at least the middle classes, haven’t had to define themselves against a stronger power,” she explains in an email.

“English identity was built within a dynamic that just isn’t active anymore and so their identity gets hooked onto quite banal things like thatched cottages and quaint villages or unattractive things like the stiff upper lip and lack of emotion (there’s a reason many movie villains are English).”

Robert Colls, professor of cultural history at De Montfort University in Leicester said in an email: “English identity is strong but it has rarely been unleashed, at least in its popular version. The established political class has preferred to keep its hands on the official version. English identity, among other things, has strong regional variants.”

The British Deputy Prime Minister Nick Clegg backed a proposal to devolve powers from central government in London to include separate English powers on Friday.

“Whatever the result there will be pressing constitutional changes. A lot of people in Britain don’t like the kind of society that is being built in London or Brussels. They’d prefer a broadly social democratic nation state making its own decisions,” said Colls.

Christine Berberich is a senior lecturer in English literature with a fascination with English identity. She moved to England from Germany 16 years ago, expecting the quaint idyllic rolling hills painted in literature. She found something else. “I realized that this is a very mythical Englishness that was created very artificially at some point in the late in the 19th and 20th centuries in direct response to the Empire and incoming foreigners.”

She said that any real sense of English identity is wed to the overarching sense of Britishness. If Scotland leaves, Britain as we know it will be finished, she said. “I think that England in a way will completely lose its sense of identity.”

Unfortunately, she said a strong notion of Englishness has only been ‘successfully’ wrought and wielded at the hands of nationalists. Any meaningful identity will have to embrace the reality of the modern multicultural nation England is, she said.

In the event of the Scots voting to leave, she thinks it will hit the English more than they realize. Mycock agrees. “I think many English people are going to be hurt in a way they don’t expect.”

But Carruthers is less sure. “I’m not sure many English people are that bothered about Scotland becoming independent except for a faint, benign sense that it’s a shame that the union will be at an end,” she said.

“English sense of identity is quite self-contained because it’s not an underdog or fighting for power or recognition. So I think Scottish independence will create only a small ripple in terms of cultural identity,” said Carruthers.