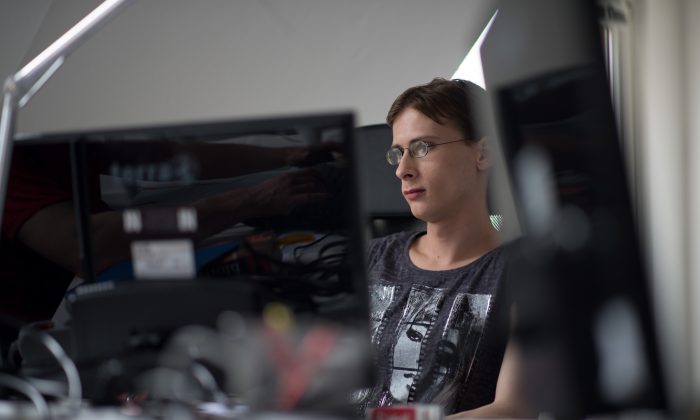 In this file photo, Melanie Altrock, 27-year autistic programmer employed at the company Auticon sits at her workplace on May 30, 2013 in Berlin. (Johannes Eisele/AFP/Getty Images)
Tech

Ahead of 2015’s World Autism Awareness Day, the Scotland-based coding platform LiveCode has launched a fundraising campaign to seek support for its online training program that will teach coding to 3,000 people around the world who have autism.

If they can reach their $350,000 goal, the company will create a special version of its training program to teach individuals with autism how to design mobile apps. A small number of people who successfully complete the 6- to 12-month program will get hired into the company.

The idea came from Todd Fabacher, a father whose son has autism, and who also happens to be good friends with the people at LiveCode.

Fabacher explained in a campaign video that when he learned only 56 percent of people with an autism spectrum disorder in the United States graduated from high school, and an even higher percentage of them are under or unemployed, he decided that he had to do something about it.

“Many on the autism spectrum have exceptionally strong skills, including pattern recognition, and high attention to detail,” Fabacher said in the video, thus making them highly capable of learning coding. He is also CEO of Digital Pomegranate, a company that helps small businesses build their online presence.

For this project, LiveCode has collaborated with several United Kingdom autism charity organizations and Specialisterne, a Danish company that specializes in finding employment for people with autism into the IT (information technology) and business sectors.

After the training course ends, LiveCode will also set up an online marketplace for those who’ve learned to code to sell their services for freelance work.

National statistics on the autistic unemployment rate are incomplete, but a 2009 survey of 11,000 young adults with disabilities aged 21 to 25 found that only 33 percent of those with autism had a job.

What Is Autism? (Video)

World Autism Awareness Day was first adopted by the United Nations General Assembly on April 2, 2008, with the goal of bringing attention to the neurodevelopmental disorder that affects more than 2 million Americans and tens of millions of people worldwide.

This year, landmarks around the world will turn on blue lights in observance of the day, including Niagara Falls, Trafalgar Square in London, England, and the Great Pyramids of Egypt.