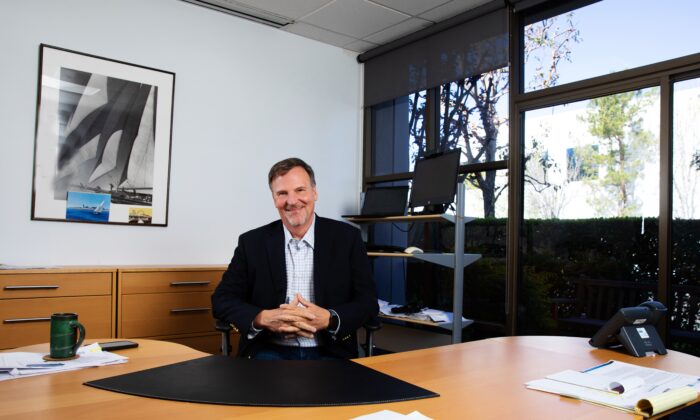 Scott Wilson works to take persistent, toxic chemicals out of the environment.

He’s the president and CEO of Regenesis, which aims to address hazardous per- and polyfluoroalkyl substances (PFAS), or “forever chemicals,” in groundwater using an activated carbon solution called PlumeStop®.

Wilson’s concern with nature and the environment started early in life.

“I’ve always been drawn to the water,” Wilson told The Epoch Times. “This started in my early youth, where I spent days in the Pennsylvania woods exploring the streams, taking in all flora and fauna. Later in my youth, our family moved to San Diego, and I fell in love with the ocean.

“I always wanted to be around water and learn as much as I could, whether studying the tide pools, watching how the cliffs erode, or even observing the wave action while surfing. Apart from the sheer beauty of water and the fact that it supports all life sources, I was also very interested in how water moves early on.”

Through his parents’ membership in the National Wildlife Federation, Wilson was exposed to “Ranger Rick,” the iconic cartoon raccoon. In one story Wilson read as an eight-year-old kid, Ranger Rick and his friends couldn’t use their swimming hole—it had been polluted.

“There was foam floating on top of the water’s surface and trash everywhere,” Wilson recalled. “I just couldn’t believe someone would do that to a river. At that age, I didn’t comprehend that many rivers were actually much worse off, so much worse, in fact, that a river could catch fire, like the Cuyahoga River did, which happened about that same time.”

Wilson later had the opportunity to work with Dr. James Zajic, whose research used microbes to treat fuel oil and address pollution.

“I was naturally led into this field from these early experiences and inspirations,” Wilson explained.

Hence his interest in groundwater contamination and, more specifically, PFAS.

PFAS has emerged as a hot topic in recent months.

In June, the Environmental Protection Agency (EPA) proposed a rule mandating PFAS reporting from manufacturers or importers of it. And in early October, California banned PFAS in food packaging and children’s clothing. More recently, PFAS have garnered scrutiny from Congress.

In the popular media, PFAS have attracted attention from the likes of infotainment host John Oliver on “Last Week Tonight.”

Asked if the media has gotten anything wrong in its PFAS coverage, Wilson argued that the discussion of emerging PFAS remediation technologies, which aim to destroy those “forever chemicals,” can be a little too bullish.

“Due to the strength of the carbon to fluorine bond, these experimental treatment technologies must involve huge energy inputs and only result in small rates of destruction. It is highly unlikely that any of these will ever be efficient enough to become viable and will not be sustainable due to the enormous [carbon dioxide] output associated with the energy requirement,” he said.

His company’s technology, by contrast, does not destroy the PFAS that it filters out of groundwater. While some contaminants that the system traps can be degraded by bacteria, PFAS are not among them.

“The PFAS is bound beneath the surface of the earth as a constituent of the aquifer material, much like other compounds such as forms of lead and arsenic,” Wilson explained. In other words, the product helps pull the PFAS out of the groundwater and binds it to the surrounding sand and rock.

He articulates his perspective on PFAS chemicals carefully:

“It is important to recognize that not all PFAS are the same. PFAS are a vast class of chemicals in the thousands with widely different environmental behavior and toxicological properties. The biggest concern right now is with two specific PFAS compounds, perfluorooctane sulfonic acid (PFOS) and perfluorooctanoic acid (PFOA),” he said.

PFOA has been linked to various cancers, including testicular cancer and kidney cancer. In addition, PFAS do not deteriorate, meaning they accumulate within the body.

Statistics from the Centers for Disease Control and Prevention (CDC) reveal that blood levels of PFOA and PFOS have steeply declined in recent years. Some of the highest measured concentrations were in 3M and Dupont workers in 2000 and 2004, respectively.

Wilson poses a question about other PFAS compounds, which he notes have not all been studied extensively:

“Do we want these substances in our bodies or in the bodies of our children and grandchildren? If the answer is no, then we should look for ways to reduce our exposure to PFAS where it makes sense, starting where there is the highest risk. My focus is on removing PFAS from groundwater and eliminating this specific exposure risk pathway. I should leave food packaging to others studying the issue.”

While manufacturers are the ultimate source of PFAS, Wilson partly attributes the widespread extent of PFAS contamination today to past government regulations, which actually mandated the use of PFAS-containing aqueous film-forming foam (AFFF) or other PFAS compounds in some settings.

“For many years, the FAA required AFFF-containing compounds to be used at airports and military bases due to its superior fire extinguishing performance. Also, the [EPA] was involved in approving PFAS use for chromium mist suppression at metal plating facilities. These are examples of how regulations can have unintended consequences,” Wilson said.

“Unfortunately, there is no commercial incentive to develop technologies to treat the chemical without regulations to set a target for what amount of a chemical is allowed in the environment,” he said.

Regenesis’s own PlumeStop® technology did not originate as a tool for PFAS removal.

“Our earliest treatment for PFAS was initially intended for gasoline contaminants, with PFAS being discovered in baseline groundwater samples once the project was already in motion,” Wilson said.

According to Wilson, his firm’s innovation is superior to pump-based approaches because it does not produce any PFAS waste. Instead, it eliminates PFAS exposure hazards for humans and the wider natural environment by binding them to an aquifer matrix.

PlumeStop® has already been utilized at various sites, including the Camp Grayling Army Airfield in Michigan.

“We just need more sites in the ground for a longer period of time to further demonstrate what the approach can do. That just takes time,” Wilson said.

“Eliminate environmental risk now instead of waiting for a silver bullet.”