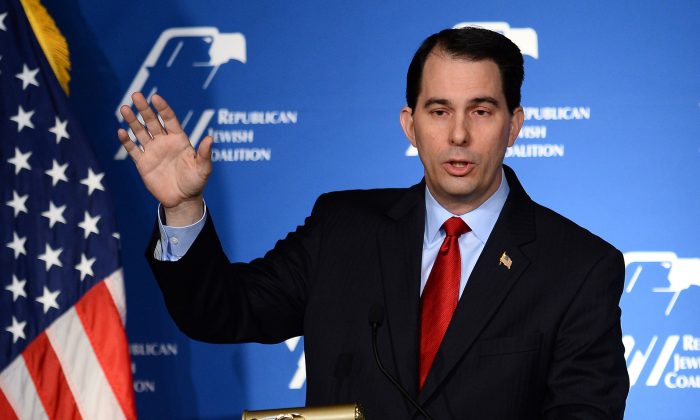 In the 2012 GOP primary, one candidate after another was hyped as an alternative to the establishment favorite. Rick Perry, Herman Cain, Newt Gingrich, and Rick Santorum all briefly surpassed Mitt Romney in the polls before poor performances under media scrutiny erased their leads.

Now, Wisconsin Governor Scott Walker is being touted as the conservative grassroots to Jeb Bush, and he has the numbers to show for it. Walker is the Republican front-runner in the key early-primary states—Iowa and New Hampshire—tied for first in North Carolina, and only trails Bush in the latter’s home state of Florida.

An unscientific Drudge Report poll with almost 450,000 respondents had 44 percent voting for Walker, far ahead of anyone else in the GOP field, and Walker is slightly ahead of Bush in Ohio and trails by a sizable margin in Pennsylvania, according to a Quinnipiac poll.

Walker, who if elected would be the first president without a college degree since Harry Truman, is already being tested for presidential mettle, and the results haven’t been promising. In an interview on ABC, Walker delivered lukewarm replies on foreign policy and immigration reform. When asked whether he would send ground troops to resolve the conflict in Syria as president, Walker said he won’t “rule anything out.”

“I think when you have the lives of Americans at stake and our freedom-loving allies anywhere in the world, we have to be prepared to do things that don’t allow those measures,” he said.

On immigration, Walker settled for a middle-of-the-road answer that could alienate both sides of an increasingly polarized issue, saying that “we can’t ignore the people who come in, whether it’s from Mexico or Central America” but also condemned “amnesty” and said “we can’t ignore the laws in this country.”

Unlike Bush, Walker still has a day-job as the governor of Wisconsin, which could quickly change from an asset to a liability given Walker’s taste for brinksmanship and political risk-taking, although he seems to have toned down that aspect in 2015. On Wednesday, Walker backed away from a proposal to change the mission statement of Wisconsin’s higher education system.

In his budget proposal for the new year, Walker wants Wisconsin to borrow $1.3 billion to fund transportation construction, up from the $991 million in the current two-year budget, and has faced opposition from Democrats who want to fund the construction with tax hikes. Transportation unions have called the proposal, which they claim would devote a quarter of the state’s transportation revenue to debt servicing, unsustainable over the long run. With a year way from the first primaries, Walker still has plenty of time to lose the goodwill he’s built up with his victories as governor.