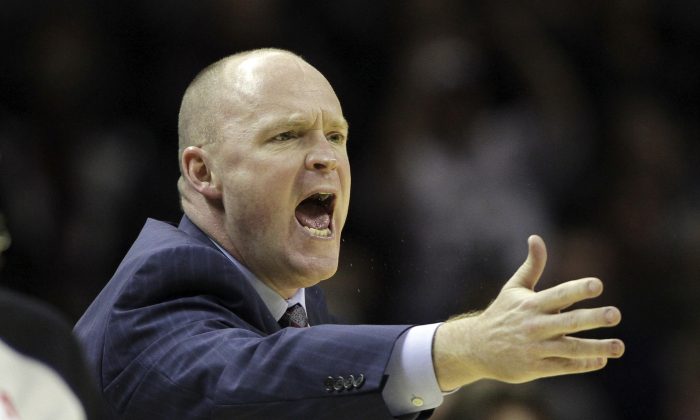 Former Chicago Bulls coach Scott Skiles could be the frontrunner to replace Orlando Magic coach Jacque Vaughn, who is widely rumored to be in jeopardy of losing his job soon.

ESPN, Yahoo, and the Orlando Sentinel are among the outlets reporting that Vaughn could be fired as soon as this weekend.

Several league executives speculated to ESPN that Skiles, who once played for the Magic, could be the frontrunner for the job if it opens up.

Skiles played about half his career for Orlando, and besides coaching Chicago has coached the Phoenix Suns and Milwaukee Bucks.

Vaughn’s young Magic squad wasn’t expected to make the playoffs this season, but the team was expected to be within reach in the weak Eastern Conference, sources told Yahoo.

Now Vaughn’s time is rapidly running out after a series of rough, double-digit losses, including one to the Bucks on Thursday night.

“It isn’t a matter of ‘if,’ anymore, but ‘when,’ ” a source close to the decision-making process said.

Skiles, 50, is known as a hard-nosed coach who focuses on defense. One of his Bulls teams, for instance, held its opposition to a league-best .422 field goal percentage.

Skiles last coached Milwaukee, starting in 2008. He led the team to the playoffs several seasons, and finished second in Coach of the Year voting in 2009-10. Skiles and the Bucks parted ways in January 2013.

Jackson, 49, got his first coaching gig with the Warriors in June 2011. He led the team to the playoffs in his second season, earning the final two years of his contract.

However, after the 2013-14 season, he was removed as head coach after the Warriors lost in the first round of the playoffs to the Los Angeles Clippers. Under new head coach Steve Kerr, the Warriors now have the best record in the NBA, and are pegged by some as favorites to come out of the West.

Jackson is currently working as a commentator for ESPN and ABC.