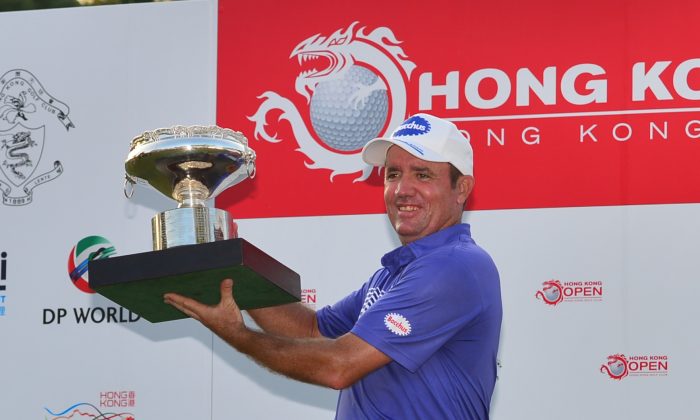 HONG KONG—Australian Scott Hend beat Angelo Que of Malaysia on the first play-off hole to win the Hong Kong Open 2014. In the play-off Hend hit the 18th green with his second shot, but Que missed the green a little to the right but not far from the hole; he surprisingly fluffed his first chip and took two further shots to hole out leaving Hend only needing to finish in regulation to take the title.

Although Hend had led the field by 1-shot for much of the final round Angelo Que of Malaysia was edging up the leader board.

Hend, then on the 17th hole, said he saw the change in the scoreboard, but still continued to play his normal game “you can’t always rely on the scoreboards, sometimes the scoreboards are not accurate” he said at the press conference after the tournament. On the 18th hole, Hend hit his second shot short and into the bunker in front of the green. His sand shot was critical, but he wedged out to within a few feet and holed the put for a par for a play-off with Que.

Kevin Phelan of Ireland produced a -4 final round to finish in 3rd place on 267 and Mark Foster of England was 4th on 270 strokes. Marcus Fraser, the leader at the start of the final round was well in contention after a birdie on the 13 hole, but bogeys at the next two holes left him 4-shots off the pace.

Ernie Els played a significant part in the tournament. He led with sub-par rounds of -4 and -5 in the first 2 rounds, but then carded a 1-over par in round-3 taking him back to -8. In the final round he dropped a shot at the 3rd and although he picked up birdies on holes 14 and 16 he never really made the charge needed to win the tournament. However, from a crowd viewpoint he was still the focus of attention and highly important to the event.

Macau Open
Many of the players that took part in the Hong Kong Open are included the Macau Open starting Thursday Oct 23, 2014.