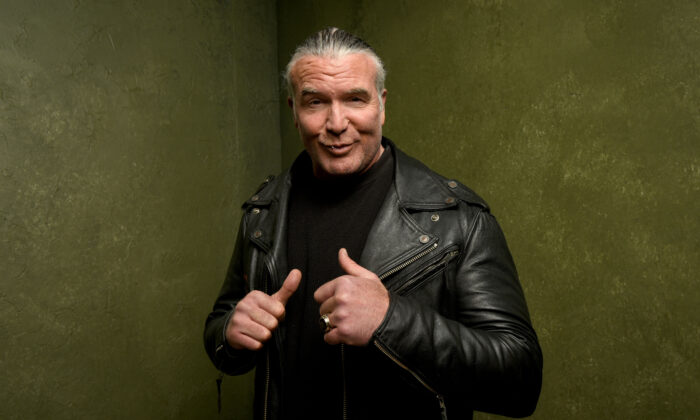 Wrestler Scott Hall from "The Resurrection of Jake The Snake Roberts" poses for a portrait at the Village at the Lift Presented by McDonald's McCafe during the 2015 Sundance Film Festival in Park City, Utah, on Jan. 23, 2015. (Larry Busacca/Getty Images)
Entertainment News

Scott Hall, a wrestling superstar and two-time World Wrestling Entertainment (WWE) Hall of Famer, died on Monday after suffering complications from surgery. He was 63.

WWE said in a statement on March 14 it was “saddened to learn” that Hall, who wrestled as the character “Razor Ramon” and revolutionized the wrestling-entertainment industry as a founding member of New World Order (nWo) led by Hulk Hogan, had passed away.

“WWE is saddened to learn that two-time WWE Hall of Famer Scott Hall has passed away,” the professional wrestling company said. “WWE extends its condolences to Hall’s family, friends and fans.”

Hall’s long-time friend and fellow nWo member, Kevin Nash, wrote in a tribute that Hall was removed from life support after “his family [was] in place.”

“I’m going to lose the one person on this planet I’ve spent more of my life with than anyone else,” Nash wrote on Instagram. “I love Scott with all my heart but now I have to prepare my life without him in the present.”

Hall began his journey in the wrestling-entertainment industry in 1984, performing with various organizations nationwide before joining World Championship Wrestling (WCW) in 1991 as “The Diamond Studd.”

In 1992, Hall signed with WWE and introduced “Razor Ramon” to fans, winning the Intercontinental title four times—the most in history at that time. He rejoined WCW in 1996, and together with Nash and Hogan founded nWo.

Hall was inducted into the WWE Hall of Fame in 2014 and again as a member of the nWo in 2020. He was loved among fans for his well-known signature toothpick throw.

WWE is saddened to learn that two-time WWE Hall of Famer Scott Hall has passed away.

Following the news of Hall’s admittance to the hospital and later death, wrestling stars past and present paid tribute.

“Scott Hall, pulling for you my friend. Stay strong! We need the ‘Bad Guy’ back in the game,” Dwayne “The Rock” Johnson said on social media, referring to Hall’s nickname, “The Bad Guy,” and catchphrase derived from the “Scarface” character Tony Montana’s, “Say hello to my little friend” and, “Say goodnight to the bad guy.”

Hogan said in a video posted on Instagram addressing a bar crowd after learning about his friend’s death that Hall always took care of him when he “was down and out.”

“Everybody thought Hulkmania was dead. Scott Hall resurrected me. He put me back on the map,” an emotional Hogan told fans on Monday. “Bad times don’t last but ‘Bad Guys’ do,” he added in the clip, referencing a 2014 speech by Hall.