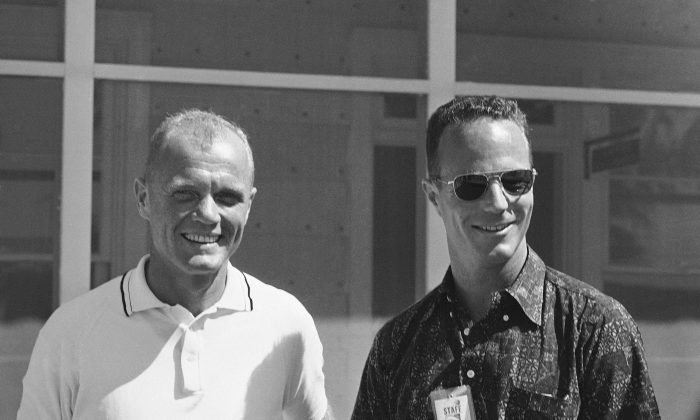 Astronauts John Glenn, left, and Scott Carpenter, pose during respite from de-briefing of Glenn by Project Mercury scientists and technicians, Tuesday, Feb. 22, 1962, Grand Turk Island, Turks and Caicos Islands. Carpenter was the backup pilot to Glenn who orbited around the earth three times in the Mercury Capsule. (AP Photo/Pool)
Science

Scott Carpenter Dies: Carpenter was One of the First American Astronauts

Scott Carpenter, one of the first American astronauts, died on Thursday in Denver, Colorado.

Carpenter was the second American to orbit Earth, reported the New York Times. He was one of the two last surviving astronauts from America’s original space program Project Mercury.

Carpenter, who was 88, flew around Earth in the early 1960s but landed far away from the planned landing point, leaving many unsure if he was alive.

But he was found in a capsule off of Puerto Rico.

He said after he was found that it was a dream come true.

“I volunteered for a number of reasons,” he wrote in “We Seven,” a book of reflections by the original astronauts published in 1962. “One of these, quite frankly, was that I thought this was a chance for immortality. Pioneering in space was something I would willingly give my life for.”

Carpenter was known as the Astronaut/Aquanaut for later participating in a U.S. Navy project to research the ocean.

Carpenter joined the Navy in 1949 and spent several years in flight training. In 1959, after years of service, he was chosen as one of the original seven astronauts, as part of the Project Mercury.

He later took leave of NASA and participated in the Navy’s SeaLab II project, during which he spent 30 days living and working in a lab 205 feet below the surface of the water, on the ocean floor, off the coast of La Jolla, California.