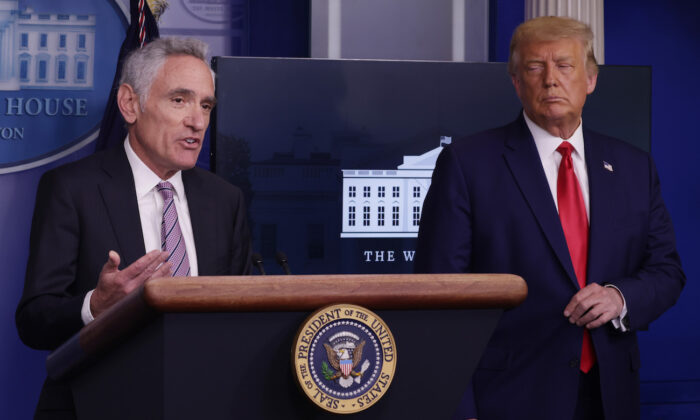 Member of the White House's coronavirus task force Dr. Scott Atlas speaks to the press as President Donald Trump looks on during a news conference at the White House in Washington, on Sept. 16, 2020. (Alex Wong/Getty Images)
US News

White House pandemic adviser Scott Atlas criticized Twitter for removing his post about mask-wearing amid the pandemic, comparing the move to the extreme censorship employed by North Korea and the Soviet Union.

Atlas, the new go-to public health adviser to President Donald Trump, on Sunday expressed skepticism about the effectiveness of masks in helping slow the spread of the CCP virus. “Masks work? NO,” he wrote, alongside examples of places where cases of infection are currently on the rise despite mask-wearing rules being enforced. The post also contained quotes from the World Health Organization, Oxford Centre for Evidence-Based Medicine, and the Centers for Disease Control.

He later followed up the message by writing: “That means the right policy is @realDonaldTrump guideline: use masks for their intended purpose—when close to others, especially high risk. Otherwise, social distance. No widespread mandates.”

The original post was deleted after being flagged by Twitter as “containing potentially misleading information related to COVID-19.” Atlas said his account was also locked for 12 hours.

“The point isn’t the masks, as you well know,” Atlas told Fox News host Tucker Carlson. “The point is we’re living in a world where an opinion, even if it’s based in fact, even if it’s science, is snuffed out as if it’s some kind of poison for even allowing it to be expressed.”

“When you cancel people out, when you cancel out facts, we’re really entering dangerous territory there,” he said. “Because the fundamental difference between the United States and the USSR, or North Korea, or any these other places, is freedom, and once we don’t allow facts to be out there, the country is finished.”

The taking down of Atlas’s post came amid a series of actions against what Twitter deemed “misinformation.” Last week, Twitter locked the New York Post’s account because of its reporting on private material allegedly extracted from a laptop that belonged to Hunter Biden, the son of Democratic presidential nominee Joe Biden. The account of White House press secretary Kayleigh McEnany was also briefly locked after she shared the Post’s story on Hunter Biden.

In the latest statement to the New York Post, Twitter said that the newspaper won’t regain access to its account until six posts that contain links to Hunter Biden stories are deleted. According to Axios, the story generated 2.59 million likes, comments, and shares on Facebook and Twitter to become the sixth-most-engaged article for the month—behind Trump’s positive diagnosis for the CCP virus and death of musician Eddie Van Halen.