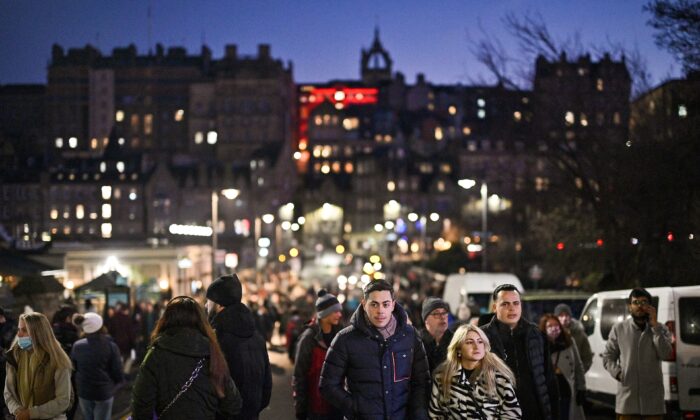 Members of the public are seen shopping on Waverley Bridge in Edinburgh, Scotland, on Dec. 18, 2021. (Jeff J Mitchell/Getty Images)
UK

The Scottish government has warned people not to evade the region’s more stringent COVID-19 rules by travelling to neighbouring England for New Year celebrations.

Scotland’s Deputy First Minister John Swinney said on Dec. 29 that it would be the “wrong course of action” for Scottish residents to mark Hogmanay—or New Year—on the other side of the border, where COVID-19 restrictions are more relaxed.

Under curbs introduced by the Scottish National Party (SNP) administration over the weekend, large events are limited to 100 people standing indoors, 200 people sitting indoors, and 500 people outdoors. As a result, New Year’s Eve street parties, including in the Scottish capital of Edinburgh, have been cancelled.

In addition, nightclubs have been ordered to close, and pubs and restaurants are limited to table service only.

The SNP government is also urging people to “stay at home as much as possible”—with any meet-ups to be limited to a maximum of three households—to slow the spread of the Omicron variant of the CCP (Chinese Communist Party) virus.

Speaking on BBC Breakfast, Swinney said it would go against the “spirit” of the Scottish regulations for party-goers to celebrate Hogmanay in England, where nightclubs are still open.

Asked if there would be anything to stop people heading to England, Swinney said: “People are free to take those decisions, but I would discourage them from doing so. I think it is the wrong course of action for people to take because we have a serious situation we have got to manage and we encourage everybody to play their part in addressing that.”

Asked about reports of people planning to travel across the border from Wales and Scotland into England to celebrate the New Year, UK Prime Minister Boris Johnson told reporters: “I think everybody should enjoy New Year but in a cautious and sensible way.”

Chloe Smith, the UK’s work and pensions minister, said people are “more than free to move around” the UK over the New Year.

Asked if it would be wrong for people from Scotland to travel into England for the celebrations, Smith acknowledged “slightly different points of guidance and regulation operating in the different parts of the UK.”

But she told BBC Radio 4’s World at One programme: “I think perhaps I should just add the obvious constitutional point here, which is that we are one country and people are more than free to move around inside our country under the general law, obviously.”