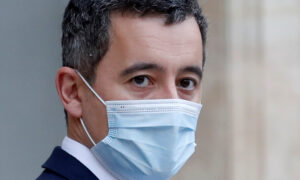 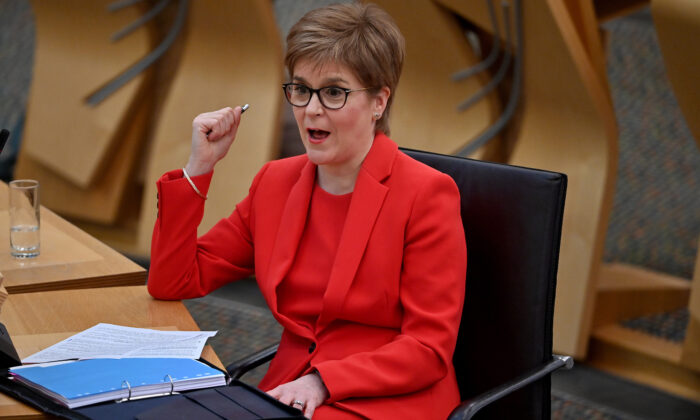 First Minister Nicola Sturgeon attends a debate at the Scottish Parliament on the trade and cooperation agreement between the UK and the EU, in Edinburgh on Dec. 30, 2020. (Jeff J Mitchell/Getty Images)
UK

Scotland will head into a new national lockdown from midnight, with the first minister giving just 10 hours notice of a new legal requirement to stay at home for all but essential purposes.

Scottish First Minister Nicola Sturgeon said that the lockdown measures were similar to those put in place during the previous CCP virus peak in the spring.

She said the new variant of the virus in the UK—which she cited as being 70 percent more transmissible, according to research—had dealt a “massive blow” to the hopes raised by the rollout of vaccines.

Sturgeon said she wanted the lockdown to bring the virus under control before a surge in cases of the new variant reaches the levels currently seen in London and southeast England.

The NHS in Scotland has been coping better with the pandemic than other places in the UK until now.

Scotland’s lockdown measures will last until the end of January when they will be reviewed.

The announcement came as the UK began the rollout of the Oxford University/AstraZenica vaccine.

Sturgeon likened the situation to a race.

“In one lane we have vaccines: our job is to make sure they run as fast as possible,” she told lawmakers in Scotland. “But in the other lane is the virus which—as a result of this new variant—has just learned to run much faster and has most definitely picked up pace in the last couple of weeks. To ensure that the vaccine wins the race, it is essential to speed up vaccination as far as possible. But to give it the time it needs to get ahead, we must also slow the virus down.”

Sturgeon said she is “more concerned now than I have been at any time since March.”

She said that when the latest figures for hospital patients and people in intensive care are published tomorrow, she expects them to be close to the April peak.

The latest figures (pdf) show that cases of the virus increased by 63 percent in Scotland in the last week of December.

She said that Scotland is likely three to four weeks behind the rising cases in London.

Different legislation has been enacted in Scotland, England, Wales, and Northern Ireland to tackle the virus.

The new measures in Scotland include a maximum of two people from up to two households being able to meet outside.

Schools in Scotland will now be shut to most pupils—with exceptions for vulnerable children and children of key workers—until February.

People will be required to work from home if they can do so, but shops and services deemed “essential” will remain open.

Travel measures are already in place with no-one allowed to travel into or out of Scotland unless it is for an essential purpose.