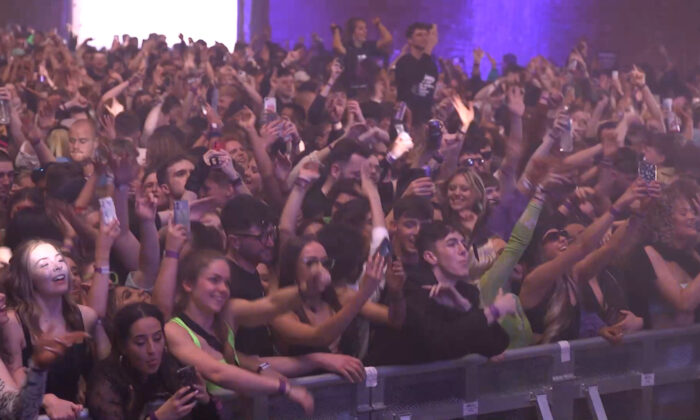 Revellers at the Circus Nightclub at Bramley-Moore Dock, Liverpool, for a COVID safety pilot event attended by around 3,000 people at the indoor venue, on April 30, 2021. (Richard McCarthy/PA)
UK

Scotland’s newly launched vaccine passport app has been experiencing technical problems according to its users.

The NHS Scotland COVID-19 Status app was made available to download on Apple and Android devices on Thursday afternoon.

From 5 a.m. on Friday, people attending large events and nightclubs will need to show proof they have had two doses of vaccine using the app before they are allowed in.

But just hours after the app’s launch, comments circulating on social media suggest many users have been unable to register on it.

The Scottish Government said the large volume of people accessing the app at once could be a reason behind the glitch.

One Twitter user posted, “Didn’t matter if I had my NHS number or not, ‘no match found’ is all I get.”

Others shared screenshots showing they were unable to get past the first login page.

A Scottish government spokesperson said, “Some people may be experiencing issues which are likely to be caused by extremely high initial traffic and a large number of users trying to access the app at once.

“We advise people whose data is not found to try again a couple of hours later.”

The launch came on the same day the Night Time Industries Association (NTIA) Scotland lost a legal bid to delay the rollout.

Following consultation with businesses affected, the Scottish government confirmed a grace period has been agreed until Oct. 18 before the scheme is legally enforced.

The legal requirement for businesses to keep information about certification status confidential and not use it for other purposes comes into effect today.

Speaking about the app’s launch, Deputy First Minister John Swinney said: “Vaccine certificates have a role to play as part of a wider package of measures. They add a further layer of protection in certain higher risk settings.

“This is a very limited scheme and we hope this will allow businesses to remain open and prevent any further restrictions as we head into autumn and winter.

There are currently no plans to introduce certification for the wider hospitality industry but this will be kept under review over the autumn and winter months, according to the Scottish government.

Exemptions to the scheme include under 18s, participants in vaccine trials, as well as people who cannot be vaccinated for medical reasons, and people working or performing in the venues.