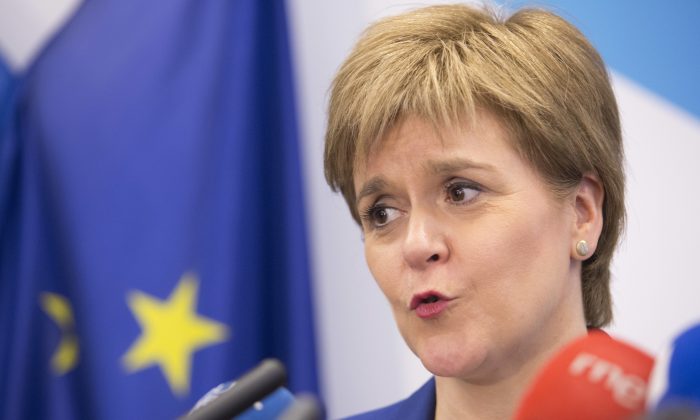 Scotland Seeks Own Future in EU Despite UK’s Departure

But Prime Minister Theresa May played down the prospect of Scotland getting a separate Brexit deal, saying that her government will be negotiating a “United Kingdom approach” with Brussels.

Britain voted to leave the EU in June but 62 percent of voters in Scotland backed remaining in the 28-nation bloc. Sturgeon, who backs Scottish independence, said Britain’s departure should be “flexible” to address the needs of the U.K.’s different constituents—England, Scotland, Wales and Northern Ireland.

Launching a document titled “Scotland’s Place in Europe,” Sturgeon said it was best for Scotland—and the rest of Britain—to remain in the European single market and customs union.

Leaving the EU single market, she argues, would be a blow to many Scottish—and British—businesses that would face new tariffs on trade. Staying in the single market though would require signing up to EU rules on the freedom of movement—regaining control of borders was one of the main reasons behind the vote to leave the EU.

Sturgeon argued that the EU referendum did not give a mandate to take any part of Britain out of the European single market. Nonetheless, she conceded it was unlikely that Britain will choose to stay in the free trade bloc.

UK Government Rejects Farage’s Ambition to Be Link to Trump

In that event, Sturgeon proposed that Scotland could stay in the European Economic Area by means of special arrangements like those that apply to the Channel Islands and the Faroe Islands.

She also proposed a substantial transfer of new powers to the Scottish Parliament—including over immigration and import and export control—in order for Scotland to pursue its own relationship with the EU.

May’s office at Downing Street said the British government would look closely at Sturgeon’s proposals, which are expected to be discussed in detail in January.

But May said it was “not right” to accept “differential relationships” for separate parts of Britain with Brussels. She said she has promised to seriously consider any plans, but “there may be proposals that are impractical.”