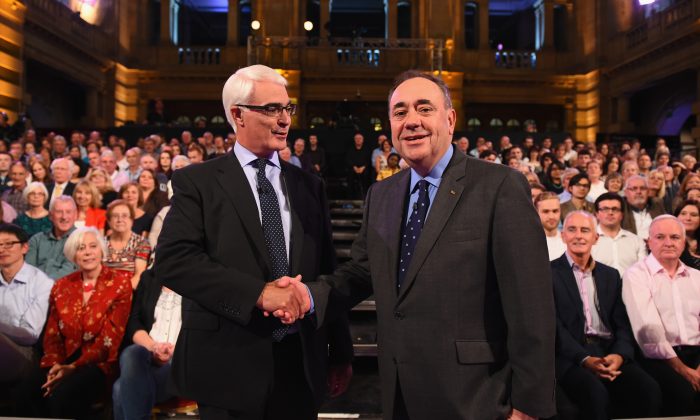 Scotland on the Brink

In the final hours of an epic two-year campaign, the future of Scotland and the UK hangs in the balance. Polls suggest that the result of Thursday’s Scottish independence referendum will be too close to call.

The debate has become increasingly acrimonious and impassioned, with a major focus on issues concerning the NHS in Scotland and enhanced devolution.

Former Prime Minister Gordon Brown has now taken centre stage for the Better Together campaign, delivering a series of fiery speeches in support of the Union.

The No side hope that his presence will help woo back Labour voters who have drifted towards voting Yes, drawn by the nationalists’ vision of a fairer society never again to be ruled by a Tory government Scots didn’t vote for.

On September 8th, Mr Brown announced a fast-tracked legislative programme in the event of a No vote, with all-party support for a rapid transfer of powers to the Scottish government, including control over tax and welfare. He claimed this will deliver real change without a risky and irreversible separation.

The Yes campaign have dismissed this as an insincere “repackaging” of previous promises, a panicked knee-jerk reaction to recent polls suggesting the gap between Yes and No has closed, and that the momentum is now with Yes.

In a vow published on the front page of the Daily Record on Tuesday, September 16th, the three main party leaders pledged to grant extensive powers to the Scottish Parliament if Scots voted to stay together, which would be delivered to the rapid timetable agreed by the three parties. The pledge states that “the UK exists to ensure opportunity and security for all by sharing our resources equitably across all four nations”.

It pledges that, because of the continuation of the Barnett formula for allocating resources and the Scottish government’s ability to raise revenues, the Scottish Parliament will have the final say on how much is spent on the NHS, one of the key issues for voters. Acknowledging that voters want change, the signed declaration states that “a No vote will deliver faster, safer and better change than separation”.

Commenting on this vow on BBC Radio Scotland, Alex Salmond, Scotland’s First Minister, said, “It’s a classic example of how this last minute desperate offer of nothing is not going to dissuade people in Scotland from the huge opportunity of taking Scotland’s future into Scotland’s hands this coming Thursday.”

In a further development, a document leaked to the BBC that was intended for senior NHS managers and civil servants, suggests that radical action will be needed to plug a £400 million NHS funding gap after the referendum. An NHS whistleblower claims that this shortfall came about as a result of Scottish government objectives and decisions that are “not fully funded”.

The contentious document seems to suggest that the most pressing risk to the NHS in Scotland comes not from Westminster, as the Scottish Nationalist party claims, but from the Scottish government’s own policies.

Alex Salmond, on BBC Radio Good Morning Scotland, dismissed the document as part of normal NHS planning, stating that service cuts were “mythical”. He said it referred to the need for 3.5 per cent efficiency savings to meet rising costs, but pointed out that the Scottish Parliament had already made plans to increase the health budget from £11.9 billion this year to £12.7 billion next year.