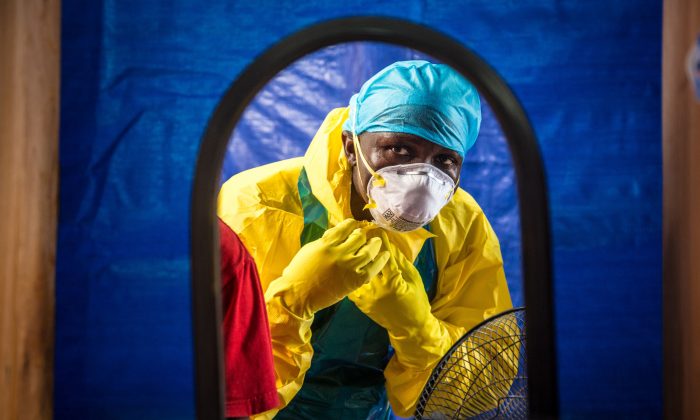 FILE - In this Thursday, Oct. 16, 2014 file photo, a healthcare worker dons protective gear before entering an Ebola treatment center in the west of Freetown, Sierra Leone. Dr. Brima Kargbo, Sierra Leone's chief medical officer, confirmed Thursday Dec. 18, 2014, that Dr. Victor Willoughby died earlier in the day after being tested positive for Ebola on Saturday, the 11th doctor in the country to die from the disease that is ravaging West Africa. (AP Photo/Michael Duff, FILE)
UK

Scottish officials on Monday have confirmed that a patient who went to Sierra Leone has Ebola.

The patient–who was not named–is believed to be the first person to contract the potentially deadly virus in the United Kingdom.

According to the BBC, the person was moved to the Royal Free hospital.

The person will be at the high level isolation unit for treatment.

The Scottish government confirmed the case with the AFP news agency and other outlets. The person is a health care worker who returned to Glawgow on Sunday night.

The flare-up is due to a number of factors including people going in and out of Liberia and traditional practices such as the washing of bodies, said Liberia’s Assistant Health Minister Tolbert Nyenswah.

“In a very small population, an increase in the number of (Ebola) cases raises high level of concerns that we need to take very seriously as people of Liberia and people of Grand Cape Mount in particular,” he said.

Nearly 3,400 people have died from Ebola in Liberia over the past year with nearly 8,000 cases total, though health officials say the situation has improved, especially in the capital, Monrovia.

Sierra Leone, in comparison, has now eclipsed Liberia with more than 9,000 Ebola cases, according to the World Health Organization.