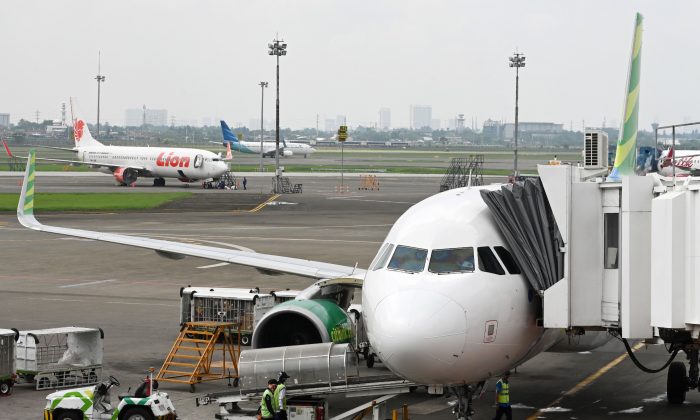 A  scorpion was seen crawling out of the overhead bin of an airplane after it landed in Jakarta, as passengers were pulling out their luggage.

The moment was captured on video by one passenger, who shared it, along with some pictures on social media on Feb. 14—Valentine’s Day.

According to the International Business Times, the scorpion was 12 inches long, although it is described in other reports as being smaller.

Karim Taslin, who was on the plane, said, according to the Daily Mail,  “When the plane had landed, one passenger was taking their things out of the compartment, that’s when suddenly the scorpion appeared above our seat. I was in row 19 with two other passengers, an elderly married couple. When we saw the scorpion above our heads we rushed out as fast as we could.”

Lion Air spokesman Danang Mandala Prihantoro told kompas.com that plane was thoroughly inspected to ensure the safety of the passengers. “To assure the safety, security, and convenience (of passengers) during the flight, the plane was properly examined to eliminate any possible pest threat,” Danang said. According to the airline, they found nothing.

The airline said that the Boeing 737-800NG was last fumigated in October and checked by pest control just a week earlier.

According to some reports, the creature was a small scorpion, according to others, it was a particularly large specimen of the larger Asian forest scorpion.

But according to the airline, it didn’t appear to be a scorpion at all.

“Based on our observation of the video, it seems like a spider,” said Prihantoro.

The tell-tale pincers of the scorpion are not immediately obvious from the video, in which a creature’s legs can be seen scuttling back and forth along on the edge of the overhead bin, its body concealed from view, as the comforting upbeat music that signals the plane has landed is piped through the tannoy in the background.

However, some photographs in the same Instagram post clearly show a scorpion—complete with pincers and poisonous stinger—clinging to the very edge of the bin as it dangles over the seat.

A Scorpion Drops in for Lunch

Onlooker Taslin said that he pressed the emergency button.

“There was no response, so I shouted for help,” he said, according to the Daily Mail. “But at that time the atmosphere in the cabin was crowded with passengers picking up their luggage, so the crew were [sic] also slow to arrive at row 19. When I think back it makes me shiver. The scorpion could have dropped on our heads and stung us.”

Lion Air is Indonesia’s largest airline, taking up half of the domestic market in 2017.

In 2017, a scorpion stowed aboard a United Airlines flight from Houston to Calgary, hiding in the business class overhead cabin until it fell on a passenger as he was eating lunch.

Richard Bell was returning from vacation with his wife, Linda Bell.

“My husband felt something in his hair,” she told CNN. “He grabbed it out of his hair and it fell onto his dinner table. As he was grabbing it by the tail it stung him.”

He brushed the scorpion into the aisle, and flight attendants were able to catch it and flush it down the toilet.