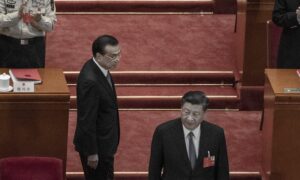 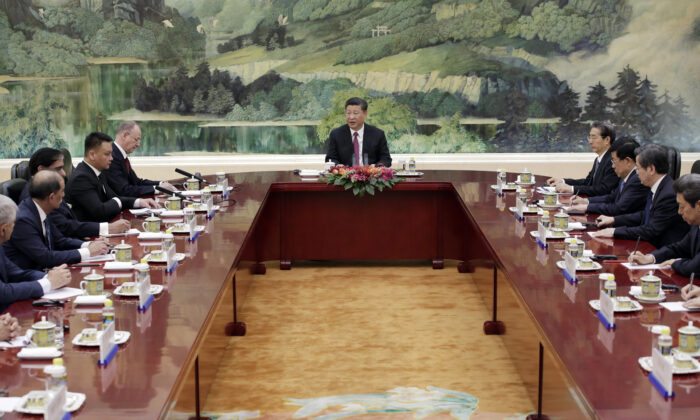 Chinese leader Xi Jinping (C) speaks during a meeting with delegates of the Shanghai Cooperation Organization (SCO) security secretary summit at the Great Hall of the People in Beijing, China, on May 22, 2018. (Jason Lee-Pool/Getty Images)
Thinking About China

SCO Summit Reveals Chinese Regime Is in a Tough Situation

Chinese leader Xi Jinping participated in a video conference on Nov. 10 with the heads of state council (the main decision-making body) of the Shanghai Cooperation Organization (SCO). He promoted the so-called community with “a shared future for mankind and multilateralism”—his typical slogan—with the other member countries. However, Xi’s speech exposed China’s challenges.

The SCO, or Shanghai Pact, is a Eurasian political, economic, and security alliance created in June 2001 in Shanghai. The member states of the SCO include Russia, China, Kazakhstan, Kyrgyzstan, Tajikistan, Uzbekistan, Pakistan, and India; as well as four observer countries: Mongolia, Belarus, Iran, and Afghanistan.

This year’s virtual summit was hosted by Russia. China’s state-run media ignored the speeches made by other heads of state and mainly focused on Xi.

The Chinese media reports inadvertently revealed the Chinese Communist Party (CCP)’s shrinking diplomatic circle. Current Sino-Indian relations are tense. India is cooperating closely with the United States, Japan, and Australia. If a confrontation between the United States and China were to occur, Russia has stated it will not form a military alliance with the CCP. This clearly downplayed the purpose of the SCO (cooperation between member states).

The SCO was originally set up for member states to share the CCP’s huge foreign exchange market. China is now faced with foreign funded manufacturing companies moving out of the country, an outflow, and has definitely felt the pinch in foreign exchange. SCO member states should have realized that there’s little hope of benefiting from the organization. The only state that may benefit from China’s shrinking market is India, since many supply chains have relocated there. Therefore, the future prospects of this organization look bleak.

Xi said at the SCO summit, “The COVID-19 pandemic has accelerated shifts in the international landscape. The world is entering a period of turbulence and transformation.” He asked: “What is going on with the world? What shall we do about it?”

It is hard to believe that the member states would ignore the fact that the CCP’s concealment of the spread of the coronavirus in China caused a pandemic. Russia closed its borders but was too late to prevent the virus from spreading in the country. Before the lockdown of Wuhan city (the epicenter of the virus) on Jan. 23, the exchanges between China and Russia continued as usual. However, Russia is currently struggling to keep COVID-19 under control, according to Western media reports.

It is indeed ironic to hear that Xi proposed a solution to “step up anti-epidemic cooperation.” In fact, he was telling the SCO members to “oppose attempts to politicize the pandemic or mislabel the coronavirus, and jointly resist any ‘political virus.’”

Holding the CCP accountable for the pandemic must be a nightmare weighing on Xi’s mind. Will Russia let it go easily?

Xi also tried to highlight “the unique value and important role of traditional medicine” and even promoted China’s vaccines. Which member states will buy his claim?

In his idea of “a shared future for mankind” within the SCO community, Xi also said, “safeguard security and stability” to “address all forms of threats and challenges.” This sounds like he is projecting the CCP’s problems onto the member states.

Xi touted the Belt and Road Initiative (BRI), even though the CCP is running out of money to fund grand projects. What Xi really wants to do is to promote China’s digital economy.

Xi also spoke about the domestic circulation theory, a term used to describe a new economic model that mainly relies on domestic consumer demands to drive China’s economy. Xi proposed this economic model because exports are almost dead this year.

Beijing’s participation in the SCO summit was fruitless and the CCP’s media had nothing to publicize.