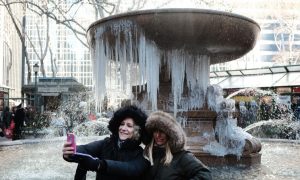 Arctic Blast Across US Cold Enough to Freeze Dogs to Death, Bring Snow to Florida
0 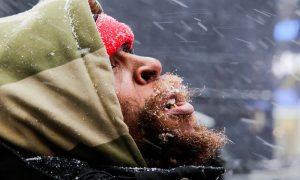 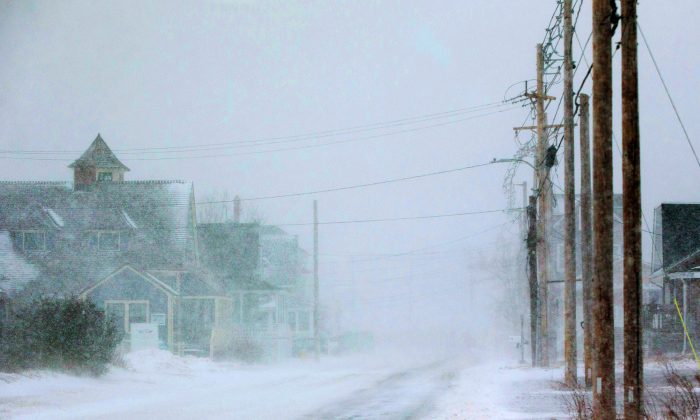 White-out conditions cloak Nantasket Ave. as a massive winter storm begins to bear down on the region on January 4, 2018 in Hull, Massachusetts. (Scott Eisen/Getty Images)
US News

The town of Scituate, Massachusetts, is expecting more than just winter weather. In fact, the town’s forecast verges on the apocalyptic.

The seaside town of about 18,000, less than 30 miles southeast of Boston, is expecting a blizzard, which could bring more than a foot of snow—and a 12-inch high tide—and a storm surge, causing flooding—and 60 mph winds—and probable power outages.

All this adds up to a very clear message: “Get … Out!”

Scituate has asked coastal residents to voluntarily leave their homes and take up lodging in emergency shelters where they might be safer.

The town published a pair of Coastal Storm Preparation Advisories online.  The second one said, “The storm forecast for Thursday has worsened a bit with increased snow potentials of 12”-16” starting between 3:00-5:00 AM with blizzard conditions throughout the day and snow ending early in the evening.

“The storm has shifted west closer to shore, which has upgraded the coastal flood watch to a coastal flood warning. With the 12.1’ astronomical high tide and the strong northeast winds, we should expect moderate coastal flooding with potential for pockets of major flooding along the immediate coastline. We encourage those who live in the flood-prone areas to evacuate by 10 AM as we could expect flooding as early as 11 AM,” the document continued. “Wind gusts are forecast to be in excess of 60MPH, which will likely bring trees and limbs down causing moderate power outages. Please prepare for the potential of power outages lasting several days.”

Based on past experience, the coast could be hit by waves 20 to 30 feet high, and water could flow 8 feet deep through the town’s streets.

After the snow passes, temperatures are predicted to plunge into the single digits, increasing the misery of people without power, or trapped in flooded homes—and increasing the difficulty for rescue crews.

Even in such trying times, the town government has not lost its heart.

Its storm advisory ends, “The Scituate Animal Shelter is available as a resource during the Thursday storm for pet owners who may be in need of emergency boarding, food, crates, leashes, collars etc.”

There will be no abandoned pets in this disaster.

Scituate residents know what to expect—because their town has been slammed by storms in the past.

In January 2015 a storm tore down stretches of seawall and left some homes completely surrounded by floodwaters. The National Guard had to be called out to help with emergency evacuations.

The water did more than flood homes, it washed out some roads.

During that storm, the town’s fire chief ordered the National Power Grid to shut off services to some parts of the town—a self-imposed blackout—because the fire department feared it couldn’t reach houses surrounded by floodwaters where a short might cause an electrical fire.

A similar scenario unfolded in December 2010, when another blizzard slammed the town.  This one also tore down the seawall and sent as much as 8 feet of water rushing through coastal neighborhoods.

Disasters caused by this storm prompted the fire department to develop its policy of shutting off power to flooded neighborhoods.

During the Dec. 26-27 blizzard of 2010, two homes burned to the ground after floodwater caused a short circuit in one home’s breaker box. The fire spread to the neighboring home.

Firemen couldn’t reach the homes because of the floodwater.

“We’ve had a couple of house fires we couldn’t get to because the ocean has flooded in between the houses,” Department of Public Works Director Al Bangert told ABC News. “Firemen went out with fire extinguishers in a rescue boat used more to rescue people in the water than fight fires. They couldn’t stop the fires, but they rescued a man stranded in a nearby house.”

Mesovortices near the center of the deepening east coast cyclone, as seen by @NOAA's #GOES16 1-minute visible imagery. #blizzard pic.twitter.com/p4p7bMIWwm

The entire Northeast is expecting to get slammed hard by what used to be called a Nor’Easter, but which some are calling a “bomb cyclone” storm. The name might sound exaggerated but the associated atmospheric conditions could be deadly.

“This could be one of the strongest offshore storms we’ve ever experienced with a central pressure in the 950s,” Fox News Senior Meteorologist Janice Dean said.

To put that barometric reading into perspective, Superstorm Sandy brought with it a low pressure of 945 millibars, making the two storms comparable in potential energy.

It's not a hurricane but it has an "eye-like" feature where warmer air is trapped, encircled, or "secluded" by a bent-back warm front. One of fastest intensifying non-tropical storms in historical analysis, and at only 39°N latitude.
Satellite link: https://t.co/8URO1E1QTf pic.twitter.com/VzGoxzEXRd

The National Weather Service has issued blizzard warnings for states from Virginia to Maine,  with states south of New York expected to get a foot of snow, and twice that northward.

New York City has canceled classes for over a million public school students.  A reporter in Cape May, New Jersey said wind gusts were hitting 30 mph at dawn. Most of the snow will hit New York City during morning rush hour.