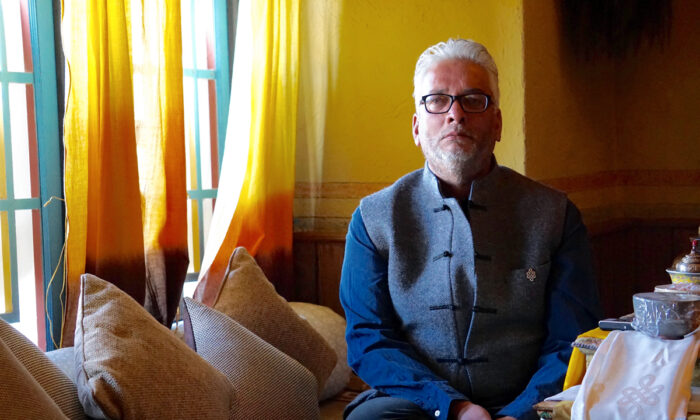 LEH, India—As tensions between India and China remain high along the disputed border in Ladakh and as the Chinese have recently encroached on Indian territory, the scion of Ladakh’s oldest dynasty said his family holds testimony that the Chinese Communist Party has no claims over the region.

“My family is a testimony; as far as the community and the nomadic people who are living in this part of the world, they’re also part and parcel of the testimony,” H.E. Raja Jigmed Wangchuk Namgyal, the 34th generation of Ladakh’s former rulers, told The Epoch Times in an interview in his residential palace in the Stok village, 10.5 miles from Leh, the capital of Ladakh.

“Because the people who are yielding and tilling their lands in certain areas, all these areas today have been enclosed by the Chinese … and you cannot do any grazing. People do have their land records,” said Wangchuk Namgyal, whose family once ruled a kingdom spanning across regions from today’s Afghanistan border to territory inside today’s Tibet and Nepal.

India and China have been engaged in a stalemate in the Ladakh region since June 15, when, in a bloody conflict, 20 Indian soldiers and an unknown number of Chinese soldiers were killed in the Galwan Valley on the de facto Line of Actual Control (LAC).

Since then, the Chinese have retreated from the Galwan Valley, but the People’s Liberation Army continues to be stationed in another region near the Pangong Tso Lake. China has refused to recognize the new map of Ladakh that came into being after the Indian administration made Ladakh into a federally governed state, called a Union Territory in India.

For Wangchuk Namgyal, such claims will never end, and he believes the Chinese have no historical records to back their claims in the region, as modern China led by the communist regime is just 70 years old whereas his forefathers started ruling the region in 980 A.D.

“When you talk in terms of the whole Chinese perspective, it is just from Mao Zedong to today’s thing. How many decades have gone?” asked Wangchuk Namgyal.

“When you look at Tibet’s history, that Tibet’s history is, again, also huge and vast for that perspective. It was not built by the Chinese. Did the Chinese build it for them?” he said, adding that his forefathers ruled territory even in what is today’s Tibet. “So there’s a whole lot of long history and a narrative to it.”

Originally from Tibet, the Namgyals follow the Drukpa sect of Tibetan Buddhism and ruled a Ladakh-centered kingdom from 1460 to 1842, after which their kingdom was taken over by the British-supported Dogra rulers who relegated the Namgyals to a feudal land grant in the Stok village, which The Epoch Times visited.

They continued to be the patrons of a few Buddhist monasteries they had founded in the region, including the renowned Hemis Monastery, and continued to enjoy respect as Ladakh’s founders and rulers among the people.

He said the rulers in the Namgyal Dynasty were called “dharma rajas,” meaning “religious kings,” and their main role was to spread Buddhism.

“So that’s why the title which we are given is called Chosgyan, meaning Dharma Raja,” Wangchuk Namgyal said.

One of his forefathers and one of the greatest rulers of the Namgyal Dynasty, Sengge Namgyal, reestablished the Hemis Monastery in 1672, which existed even before the 11th century.

The Namgyals continue to be the current patrons of the Hemis Monastery, which is linked with the spiritual legacy of the Tibetan master Naropa, who was the master of Marpa, who was in turn the master of the famed Buddhist master, Milarepa. These masters established the Drupka sect of Tibetan Buddhism to which Wangchuk Namgyal’s family also belongs.

The Namgyal Dynasty built other monasteries such as Hanley, Tak Thok, and Chamdrey during its period of direct rule.

Wangchuk Namgyal said “rulers and kingdoms” had a very important role to play in the world predating modern politics.

“They will always go on the other side of it, they do not believe in the whole aspect of religion for that matter. They don’t really believe in all these things.”

When asked what’s at stake politically in today’s Ladakh, Wangchuk Namgyal said Ladakh is a strategic location in the world today and is important geopolitically.

India hasn’t played the “Tibet card in the right direction,” he said, whereas Ladakh had a very close and long time relationship with Tibet.

“As far as China is concerned, this only came in during the time when the communists really came in there. Before that, all these things were never there in the situation,” he said.

“One [China] can always claim whatever it is, it could be on the other side, where the government of India can say, we’ve also have got the same kind of claims,” he said, adding that such claims can go on and on and his family’s history is a proof that China has no claims in Ladakh today.

He said since India and the United States are close allies today, he favors Americans having a “strategic base” in Ladakh.

“Of course, we’ve been fighting for it for a very, very, very, very long time,” Wangchuk Namgyal said, describing a people’s movement within Ladakh for a federal status under the Indian nation.

“It’s a wonderful feeling, it’s a great thing that we have our own separate status as far as the Ladakh is concerned today,” he said, adding that this means Ladakh now can assert its own unique history and identity.

He said his main concern now is to be able to protect the whole “ecosystem of Ladakh in the right spirit.”

Describing what he means by the ecosystem, he said, “It becomes important to safeguard the cultural heritage of Ladakh … the people’s systems and beliefs … the monastic setups which we have, [and] the living heritage.”

Wangchuk Namgyal believes the world today has become a global village, and what happens in one part of the world impacts everyone.

“The most important part of this whole thing in today’s time is to remain patient, to be compassionate, as what Ladakh is all about, and when you talk in terms of the Himalayas, or when you talk about the mountains, it really humbles you,” he said in his message to the world from his architecturally conserved palace in Ladakh.