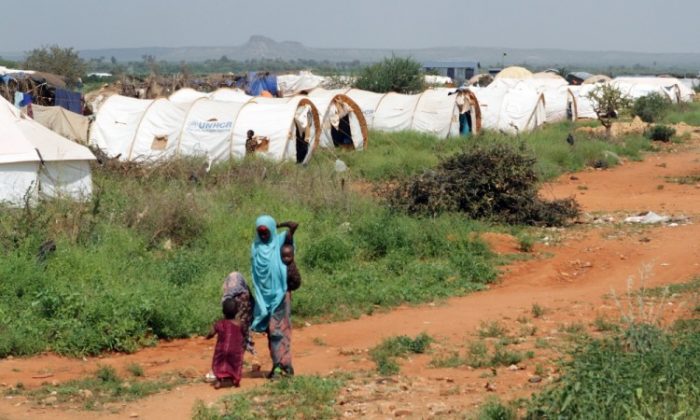 A woman and some children walk through the Hilaweyn refugee camp in Dolo Ado, Ethiopia, in December. (William Davies/AFP/Getty Images)
International

Scientists Warn of Global Humanitarian Crisis Ahead of Rio Summit

Scientists told the upcoming United Nations-backed environmental summit in Rio de Janeiro that delegates need to address the Earth’s environmental and sustainability challenges or humanity will face an unprecedented disaster.

“Research now demonstrates that the continued functioning of the Earth system as it has supported the well-being of human civilization in recent centuries is at risk,” reads the “State of the Planet Declaration,” issued Thursday.

If the world does not act in a timely manner, the world’s water, food, biodiversity, and other resources will be at risk.

When these resources become scarce due to “intensifying economic, ecological, and social crises,” it added, there is a greater possibility that the Earth could be beset with a “humanitarian emergency on a global scale.”

Scientists called on the Rio Summit in June, the 20-year follow-up to the landmark 1992 Earth Summit in Rio, to improve environmental policies and move away from gross domestic product as a nation’s measurement of prosperity. The report states that it would represent the “defining challenge of our age.”

The report was created by Lidia Brito, director of UNESCO’s science policy, along with Mark Stafford Smith, a co-chairman of the Planet Under Pressure conference held in London earlier this week. The conference was attended by nearly 3,000 experts to discuss the world’s environmental condition and better governance.

In recent decades, countries around the world have become more interconnected, bringing innovation and stability, but the system has displayed a weakness to sudden shocks, such as the global financial meltdown a few years ago, the report stated. It said that environmental damage could cause an even more catastrophic scenario.

The growth in the worldwide population since the 1950s has brought about unsafe levels of pollution, resource demand, and overall ecological changes, which is not sustainable at the current rate, the declaration states.

“[I]t is no longer sufficient to work towards a distant ideal of sustainable development. Global sustainability must become a foundation of society,” says one of the key points in the document.

However, existing agreements are not dealing with global challenges including climate change and the loss of biodiversity, it said.

The key to changing the situation, the scientists advise, its not merely through technological innovation—which can also be effective if implemented in a timely fashion—but through the transformation of values, beliefs, and goals toward sustainable growth. Such aspirations will likely require sweeping and major reforms.