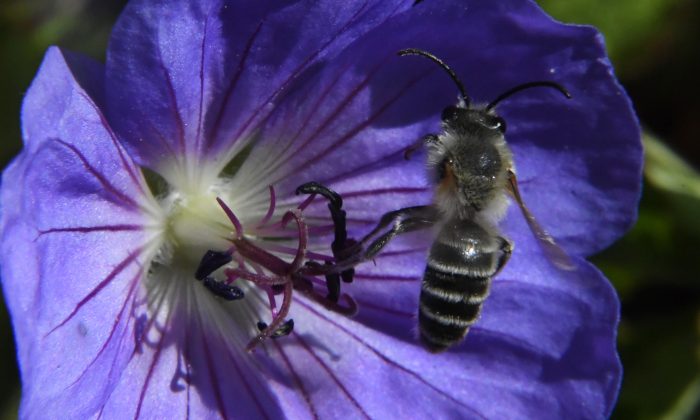 This photo taken on July 8, 2017, shows a honeybee hovering above a geranium flower in a garden in Hede-Bazouges, western France. (DAMIEN MEYER/AFP/Getty Images)
US News

The humble honeybee is sending a warning about the environmental disruption that affects not just this key link in our food production, but affects multiple species, with serious, negative effects on human beings.

Scientists say the key to reversing these alarming trends lies in banning a popular weed killer, while initiatives are underway to try to support the honeybee.

The bad news about the honeybee only continues to get worse.

For the past decade, the University of Maryland’s nonprofit Bee Informed Partnership has conducted its annual, nationwide honeybee survey: Bee colonies continued their steep decline, plunging 40.7 percent, year over year.

Trendlines “averaging a nearly 30 percent colony loss rate among its domestic bees” since 2006 in the United States are unsustainable, the South Dakota News Watch reports.

The implications for U.S. food crop production are dire, affecting almonds, apples, cranberries, and cotton, among dozens of other food crops. As pollinators, bees are responsible for “35 percent of global agricultural land, supporting the production of 87 of the leading food crops worldwide,” according to the United Nations’ Food and Agriculture Organization 2018 report, “Why Bees Matter.”

Pollination is critical for plants to reproduce, spreading food seeds around that sustain humans and wildlife. The loss of bees has resulted in the loss of pollination density and plant diversity.

We know that pollinating bees have been dying off in staggering numbers in the 21st century, with losses amassing an increased rate and velocity since the 1990s. What vector exists today in abundance that didn’t exist in the environment back then?

Herbicide use, in particular, glyphosate, the active ingredient in Roundup, has risen exponentially in over-spraying crops, lawns, and gardens.

As a result of the widespread use, glyphosate levels in humans have increased by 1,208 percent, since tests were taken over three-year periods between 1993–1996 and 2014–2016, according to a study conducted by the University of California–San Diego.

Glyphosate, Honey, and the Bee Gut

Glyphosate disrupts the bee gut microbiome, affecting their memory and impairing their navigation through the gut-brain access, according to Dr. Stephanie Seneff, a principal research scientist in the Spoken Language Systems Group at the MIT Laboratory for Computer Science.

Neonicotinoids are found in most pesticides and herbicides, including Roundup. All honey in the United States is covered with glyphosate, with the toxin also found in bee larvae.

“Bees depend critically on their microbiome to help digest food and boost immunity, just as is the case for humans,” said Seneff. “Furthermore, multiple species of lactobacillus [friendly bacteria] help to suppress fungal growth in the nectar and pollen that bees collect from flowers and insert into chambers in the honeycomb where the eggs are laid. Studies on poultry microbiota have shown that lactobacillus strains are especially sensitive to glyphosate.”

“Cytochrome P450 (CYP) enzymes in the liver are essential for detoxing neonicotinoids. Glyphosate has been shown to severely suppress CYP enzyme activity in rats, and therefore, it can be predicted that glyphosate works synergistically with the neonics to harm the bees,” she said.

A new study, “Glyphosate’s Synergistic Toxicity in Combination with Other Factors as a Cause of Chronic Kidney Disease of Unknown Origin,” published in the International Journal of Environmental Research and Public Health (August 2019), by Seneff with two other scientists, sees glyphosate as the gateway to many human diseases that range from diabetes and obesity, to ALS and autism.

The authors wrote in “Section 4. Glyphosate as a Glycine Analogue”:

“Detailed descriptions of strong glycine dependencies in proteins linked to various diseases have been presented in a sequence of recent papers, relating glyphosate substitution for glycine during protein synthesis as a plausible contributory cause of diabetes, obesity and Alzheimer’s disease, amyotrophic lateral sclerosis (ALS), autism, multiple sclerosis and prion diseases, anencephaly, CKDu and gout.”

“The main gut microbe S. alvi is critical to intestinal health of bees and their ability to manufacture amino acids,” said Bell, who has worked as a UNICEF radio spokesperson for its “State of the World’s Children Report,” and in 2016, founded The Gut Club. “Glyphosate is found inhibiting amino acids production, and those amino acids that are required for other microbes in the bee gut to survive.”

Monsanto, the inventor of glyphosate, may not have realized that the same disruption in weeds occurs in birds, animals, insects, and humans.

But Bell said the pan-species effects are real. He concluded with the warning that he believes glyphosate is a leading factor in Parkinson’s disease, with newly published studies linking the gut to the degenerative nervous system disorder.

In 2011, Frédéric Moisan, et. al., discovered the relationship between farming and the incidence of Parkinson’s disease among workers in five French agricultural districts, in the journal Anses, “Movement Disorders” (Vol. 26, Issue 2, pages 271–279, 1 February 2011).

New research in Washington state concluded that residential exposure to herbicides, such as Roundup, was linked to premature mortality by Parkinson’s disease.  The disease mechanism links to glyphosate disruption of the gut-brain access and amino acids production.

A first step in recovering from the ill effects of glyphosate would be to help restore the honey bee population.

Minnesota has launched a “Bee-Friendly Lawn Program,” that will pay and educate homeowners to transform their modern lawns and gardens into pollinating bee sanctuaries.

The one-time appropriation bill will establish the bee program, with nearly $1 million in funding from the state’s Environment and Natural Resources Department and trust fund, which is supported by lottery revenue, said Angie Becker Kudelka, assistant director of Minnesota’s Board of Water and Soil Resources.

“The program in development has three components, which have received high interest. They are residential lawns with a focus on agriculture, wetlands restoration, and subdivisions. Workshops educate on pollinating habits, with cross-sharing of financial supports and technical assistance,” Becker Kudelka said.

“We see the opportunity to restore pollinator corridors using demonstration projects and landscaping options that will positively improve pollinator friendly habitats,” she said. “Bees contribute to the economic lifeblood of the state, including soybeans. We recognize that 75 percent of Minnesota consists of private landowners, who can turn the tide on water quality and land usage. This will be private land with public benefit.”

Minnesota legislators realize that the endangered rusty patch bumblebee needs help in land use and restoration through a range of plants, native species, and flowers, including milkweed. Minnesota’s program will be driven locally by residents and volunteers.

Becker Kudelka is excited about the bee program, the most robust in the United States, saying, ”Pollinators are so critical to crops that, without them, our food system would be different.”

Minnesota’s neighbor, South Dakota, has its own “Managed Pollinator Plan.”

States must start somewhere, as neither the U.S. Environmental Protection Agency nor federal government has expressed interest in combating the glyphosate issue.

To protect the environment, and human health, many argue glyphosate should be banned. In February, Austria became the first country to do so.

Miami and Los Angeles banned glyphosate in 2019, as a legal precaution against the 18,000 lawsuits filed against Bayer, which acquired Monsanto in 2018, and may now be suffering buyer’s remorse.

What remains to be seen is whether agriculture producers such as California and the Plains States, out of concern for the decline in bee colonies, the diversity and robustness of plants and food crops, and the health of their citizens, will follow Austria’s lead by banning glyphosate and Roundup, then look at Minnesota’s effort to rebuild pollinator corridors where people live.

As Seneff said: “If you care about pollinating bees, you will ban glyphosate.”

As of press time, the Bayer Crop Science Group hadn’t responded to requests for comment.

Correction: A previous version of this article falsely stated that RoundUp includes neonicotinoids. The Epoch Times regrets the error.