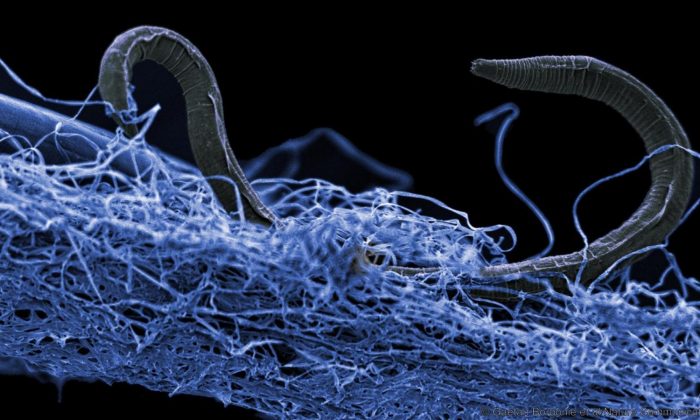 A nematode (eukaryote) in a biofilm of micro-organisms. This unidentified nematode from Kopanang gold mine in South Africa lives almost a mile below the surface. (Gaetan Borgonie/Extreme Life Isyensya, Belgium)
Science News

Deep underground, deeper than the oceans, scientists have found a world teaming with life: creatures that together outweigh the total mass of all humans hundreds of times.

The creatures of the Deep Earth, as scientists call it, aren’t exactly visions from science fiction—unless viewed through a microscope—but could give clues about alien life.

Microorganisms buried in the earth’s subsurface form a complex, massive biosphere that stretches up to 3.5 miles deep, according to scientists who have spent 10 years pulling core samples from the earth’s crust.

The Deep Carbon Laboratory, a collaboration of 1,200 researchers, revealed some of their findings on Dec. 10.

The deep biosphere is a “subterranean Galapagos” that contains about 70 percent of the planet’s bacteria and other microorganisms. It is double the volume of the world’s oceans and home to organisms with a total carbon weight of 15 to 23 billion tons.

“A decade ago, we had no idea that the rocks beneath our feet could be so vastly inhabited,” said Isabelle Daniel, Professor of Bio-geology at the University of Lyon, France, in a statement. “Experimental investigations told us that microbes could potentially survive to great depth; at that time, we had no evidence, and this has become real 10 years later. ”

The genetic diversity found below the surface is comparable to that above the surface, leading to comparisons with explorations of the Amazon forest, rich in biodiversity.

Advances in DNA sequencing and deep ocean drilling allowed researchers to examine the composition of the deep biosphere, as they drilled 1.5 miles into the seafloor, and sampled continental mines and boreholes more than 3 miles deep.

“Deep microbes are often very different from their surface cousins, with life cycles on near-geologic timescales, dining in some cases on nothing more than energy from rocks,” said the statement from Deep Carbon Laboratory.

The research prompts more questions, according to the statement, such as how the creatures move and migrate: “How does deep life spread—laterally through cracks in rocks? How can deep life be so similar in South Africa and Seattle, Washington? Did they have similar origins and were separated by plate tectonics, for example?”

Their findings even touch on broader questions about life on other planets.

“Even in dark and energetically challenging conditions, intraterrestrial ecosystems have uniquely evolved and persisted over millions of years,” said Fumio Inagaki, of the Japan Agency for Marine-Earth Science and Technology.

“Expanding our knowledge of deep life will inspire new insights into planetary habitability, leading us to understand why life emerged on our planet and whether life persists in the Martian subsurface and other celestial bodies.”

Despite uncovering some microbes that can thrive at 121 degrees Celsius, others that can live in pressures of 400 atmospheres, and that can exist without nutrients as microbial “zombies,” the researchers believe there are more surprises in store.

“The absolute limits of life on Earth in terms of temperature, pressure, and energy availability have yet to be found,” said the statement. “The records continually get broken.”