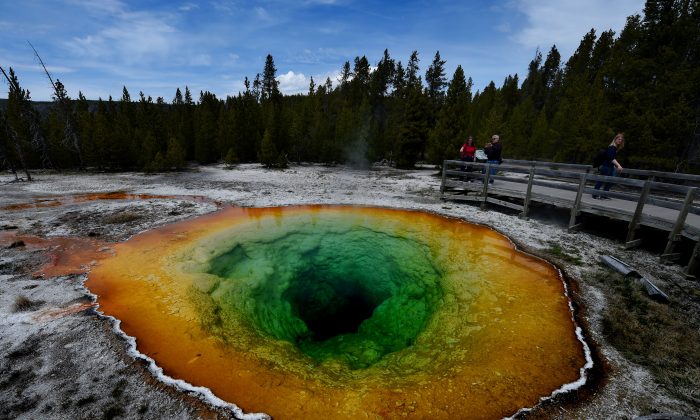 New research says that the hotspot underlying the Yellowstone supervolcano has a different origin than previously thought.

Geologists at the University of Illinois say Yellowstone’s heat is actually being funneled east from the geologically active Pacific Coast.

They used seismic waves that travel through the earth following earthquakes to produce a view underground similar to an X-ray, reported the Independent Record.

“The information was then fed through a supercomputer to mimic different geologic scenarios that are known to have occurred over the past 20 million years in an attempt to come up with an explanation for the Yellowstone hotspot,” according to the article.

“A robust result from these models is that the heat source behind the extensive inland volcanism actually originated from the shallow oceanic mantle to the west of the Pacific Northwest coast,” said geology professor, Lijun Liu, who led the research, in a statement. “This directly challenges the traditional view that most of the heat came from the plume below Yellowstone.”

The leading competing theory is that the hotspot is fed by a deep mantle plume.

However, Earth magazine notes that the plume theory is difficult to confirm because the mantle cannot be studied by fieldwork, and is instead being remotely sensed and modeled.

“What little we know about the mantle’s composition and structure has been gleaned from geochemical analyses of deep-sea lavas or the rare chunk of exhumed mantle rock, and from interpretation of seismic waves that have traveled through the deep Earth,” wrote Sara Pratt.

Michael Poland, the Yellowstone Volcano Observatory scientist-in-charge, told the Record that he doesn’t necessarily agree with Lin’s research, but he hopes the new theory will spur more research into the hotspot.

“It’s an interesting debate that’s going to be raging, hopefully for decades,” added Robert Porritt, a seismologist at the University of Texas at Austin to ScienceNews.

Lin’s research was published in Nature.