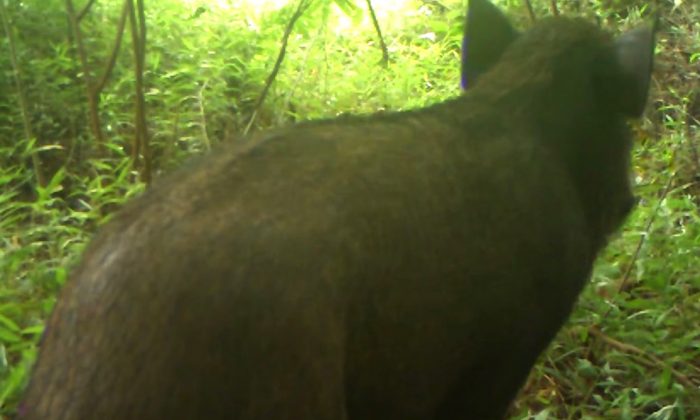 A screenshot from video that recorded the Javan warty pig in the wild for the first time. (Screenshot via Act for Wildlife/YouTube)
Asia & Pacific

“For me,” said Dr. Johanna Rode-Margono, via BBC, “they are not ugly – they are beautiful.”

Rode-Margono leads the warty pig project and is the Field Programme Coordinator for South East Asia at the Chester Zoo in England. She and her team set up cameras at seven locations in Java, Indonesia. They were only able to see Javan warty pigs at three locations, indicating the population of the animal is low, but not extinct, as they feared.

Rode-Margono told Chester Zoo that “we’re worried that the species may be already locally extinct in many locations and may even be in immediate risk of becoming extinct. No wild population was confirmed by direct sightings.”

The new footage is the only time this species has been recorded in the wild, and gives researchers hope. At least it confirms that warty pigs still exist in the wild.

Scientists were afraid the Javan warty pig had gone extinct. The species is classified as “endangered” by the International Union for Conservation of Nature and Natural Resources. The population declined by 50 percent over the last three generations of its existence. The primary reasons include deforestation and hunting, according to a the IUCN Red List of Threatened Species.

Researchers also think interbreeding with the more populous and widespread Eurasian wild pig could be a threat to the warty pig’s survival, Rode-Margono told BBC.

Rode-Margono told BBC the pig species plays an important role in the ecology of the environment where it lives. They keep the soil usable with their digging and tilling, and they spread seeds from the foods they consume.

“And everything in our ecosystem is connected – every tree, every plant, every animal. They depend on each other,” Rode-Margono said, via BBC. “If something breaks away, something else [could] break away, and that’s a chain reaction where we can’t foresee what will happen.”

Although three of the locations where camera traps were set showed warty pigs, scientists still worry that in the other four locations, the pig may have already gone extinct.

“That means the threat is ongoing and if we don’t do anything, more and more populations will disappear,” Rode-Margono told BBC. “This is a big red flag.”