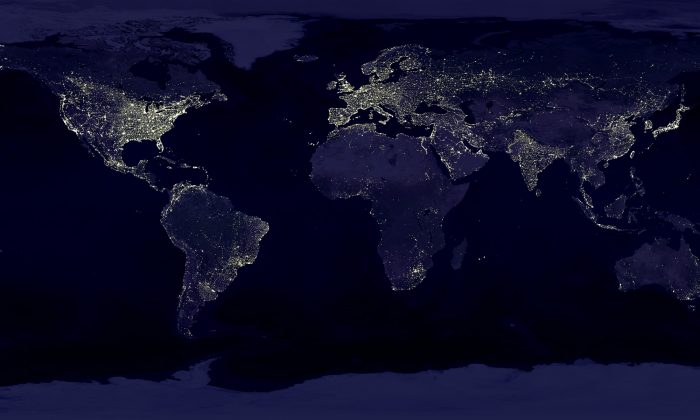 Photo of the earth at night. (Marc Imhoff/NASA)
Science

Officially, the world is still in the Holocene Epoch, a geology-related category spanning roughly from 9,700 B.C. to the present day, but geologists have toyed with a new concept in recent years, and are now taking steps to make it official.

A group of scientists published a report in Science on Friday that sought to formally justify the necessity of the “Anthropocene” Epoch, a term introduced in 2000 that cover the geological history of the planet from the Industrial Revolution up to the present day.

In this time interval, human activity has generated unique stratigraphic changes in the earth’s sediments to such a degree that it merits a conceptual break from the Holocene. Among the attributes of the Anthropocene is the rapid accretion of “technofossils” composed of previously novel materials like “aluminum, concrete, and plastics.”

Other characteristics include geo-chemical signatures such as increased levels of pesticide residues and compounds found in coolant fluids and fossil fuels, as well as heightened CO2 and CH4  concentrations that depart drastically from most of the Holocene.

However, not all of these features were introduced at the same time, and the scientists, organized as the Anthropocene Working Group, are still in the process of determining when to date the beginning of the Anthropocene, which could be as recent as 1950.

“There’s still some discussion as to whether it should be a formal or informal unit, but we’d like to have a specific definition. And a majority of the group are moving towards the mid-20th Century for the start of this new epoch,” the British Geological Survey scientist told BBC News.

The Working Group also suggested an “early Anthropocene” category to encompass the spread of agriculture and the exchange of species that came about as a result of Columbus’s discovery of the new world.

The Group aims to submit a formal definition of the Anthropocene to the International Commission on Stratigraphy by 2016.