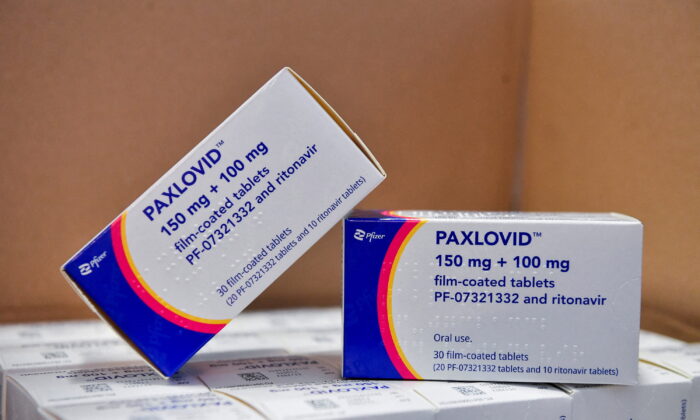 President Joe Biden posted a video after he tested positive for COVID-19 again saying that he’s “feeling fine,” as some scientists have begun to speculate that rebound cases tied to the use of the antiviral drug Paxlovid are more common than initially suspected.

“Hey, folks, Joe Biden here. Tested positive this morning. Going to be working from home for the next couple of days. And I’m feeling fine, everything’s good. But Commander and I got a little work to do,” Biden, 79, said in the video posted to Twitter late on July 30. He was referring to his dog, Commander.

White House physician Dr. Kevin O’Connor said in a letter on July 30, in confirming Biden’s diagnosis, that people who take Paxlovid can test positive for the virus after testing negative.

“As described last week, acknowledging the potential for so-called ‘rebound’ COVID positivity observed in a small percentage of patients treated with Paxlovid, the President increased his testing cadence, both to protect people around him and to assure early detection of any return of viral replication,” O’Connor said. Now, Biden will engage in “strict isolation procedures,” O’Connor said.

Biden tested positive again for COVID-19 on July 30 after using an antigen test, the letter said. It comes days after he tested negative and delivered a speech at the White House.

Dr. Jonathan Reiner, a prominent cardiologist and professor of medicine at George Washington University Hospital, wrote that he believes that “COVID rebound” cases sparked by taking Paxlovid are quite common.

“The prior data suggesting ‘rebound’ Paxlovid positivity in the low single digits is outdate[d] and with BA.5 is likely 20-40 percent or even higher,” Reiner wrote on Twitter in response to Biden’s second positive test. He didn’t provide a study or data to back up his comment.

Eric Topol, a physician and scientist, wrote on Twitter that “Paxlovid rebound is quite common … a retrospective study using [electronic health records] of 11,270 people before BA.5 that suggests it’s 5 percent is way off the mark.” Topol was citing a National Institutes of Health-published study from last month.

“The actual incidence can only be meaningfully assessed through a prospective study conducted directly with participants with frequent testing. This is in progress. Whether longer than 5 days treatment will reduce the rate also needs to be determined by a RCT (5 vs 10d),” Topol wrote on July 31.

Pfizer’s clinical trial suggested there is a 1 to 2 percent chance of a COVID-19 rebound case linked to Paxlovid. Last month, White House COVID-19 czar Ashish Jha said there’s a 5 percent chance while stressing that “when people have rebound, they don’t end up in the hospital” and “don’t end up particularly sick.”

Jha previously rejected the claim that Paxlovoid rebound numbers are far higher than what the studies say. The actual percentage, he claimed, is “in the single digits.”

“If you look at Twitter, it feels like everybody has rebound, but it turns out there’s actually clinical data,” Jha said in a briefing last week. “If you look at major health systems that have given out Paxlovid to tens of thousands of people, rebound rates are around 5 percent. There are some studies that say it’s maybe 7, 8 percent, some that say it’s 2 percent, but it’s in the single digits. So it happens; it’s not that frequent.”

He continued to say that “when people have rebound, they don’t end up in the hospital. They don’t end up particularly sick,” adding, “Paxlovid is working really well at preventing serious illness, rebound or no rebound, and that’s why he was offered it. And that’s why the president took it.”

Weeks before that, the U.S. Centers for Disease Control and Prevention issued an alert to health providers about rebound cases associated with Paxlovid, which is made by Pfizer.

“Paxlovid continues to be recommended for early-stage treatment of mild to moderate COVID-19 among persons at high risk for progression to severe disease,” said the agency in a notice posted in June. “Paxlovid treatment helps prevent hospitalization and death due to COVID-19. COVID-19 rebound has been reported to occur between 2 and 8 days after initial recovery and is characterized by a recurrence of COVID-19 symptoms or a new positive viral test after having tested negative.”

Pfizer has not responded to a request from The Epoch Times for comment.