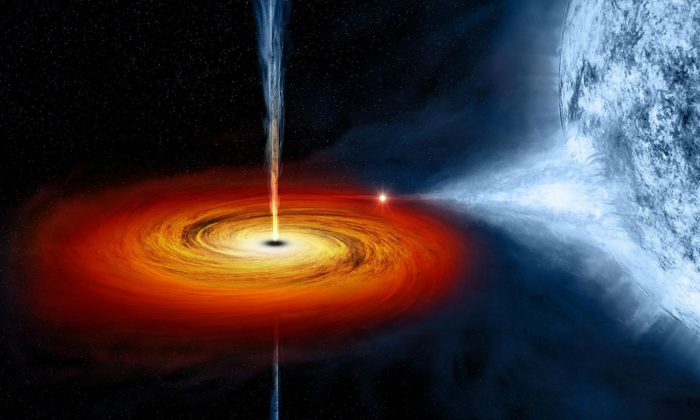 A study published in journal Science said that a black hole “swallowed” a star before sending it back out again.

Scientists tracked a star that’s about the same size as our sun as it was pulled from its normal path into a supermassive black hole before it was eaten. They then saw a flare sent back out at a high speed, which escaped from the edge of the black hole. The researchers said it’s the first time they’ve captured a hot flare coming out right afterwards.

“These events are extremely rare,” Sjoert van Velzen, who led the analysis, stated, according to a press release. “It’s the first time we see everything from the stellar destruction followed by the launch of a conical outflow, also called a jet, and we watched it unfold over several months.

“Previous efforts to find evidence for these jets, including my own, were late to the game.”

Supermassive black holes are believed to exist on the outermost edges of the most massive galaxies in the universe.

“The destruction of a star by a black hole is beautifully complicated, and far from understood,” van Velzen added. “From our observations, we learn the streams of stellar debris can organize and make a jet rather quickly, which is valuable input for constructing a complete theory of these events.”

The galaxy where the phenomenon was observed is around 300 million light years away.

According to the press release, Ohio State University astronomers were the first to catch the process of a black hole eating a star by using an optical telescope.