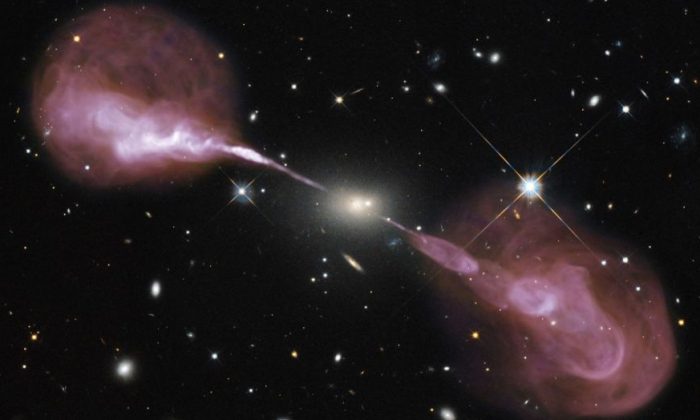 Fountains of hot gas erupting from a beastly black hole in the heart of a large galaxy known to radio astronomers as Hercules A. (https://public.nrao.edu/mediause)
Space

Scientists Hope to Actually See a Black Hole in 2018

For the first time since theoretical physicists predicted their existence, scientists think they might actually get to see a black hole in 2018.

Astronomers have detected signs of black holes—observed the giant interstellar gas clouds they attract and the distortion of space they cause. In 2008 scientists hope to actually see the supermassive black hole at the center of the Milky Way galaxy.

What astronomers hope to see is what is called the “event horizon,” the limit beyond which nothing—not even light—can escape a black hole. This should show up as a black disc silhouetted against the glowing gas surrounding the mysterious cosmic object.

“One of the really nice things about this is taking an image of black hole event horizon has been beyond our reach for so long that it’s been a pleasant surprise to build upon these existing technologies and capture an image so soon,” says Monash University astrophysicist Professor Michael Brown, FoxNews reported. “It really complements the exciting gravitational wave discoveries of merging black holes and the creation of new black holes.”

Having fun with making new movies for a talk. This is accretion disk and a black hole in polarized light at different viewing angles… pic.twitter.com/0aozerYiA1

The tool that will make this possible is the Event Horizon Telescope (EHT)—which is actually not one, but a number of telescopes. The EHT includes radio telescopes in Arizona, Chile, Mexico, Spain, Hawaii ,and the South Pole.

“By uniting the most advanced millimeter and submillimeter wavelength radio dishes across the globe, the Event Horizon Telescope creates a fundamentally new instrument with the greatest magnifying power ever achieved,” said Harvard University researcher Shep Doeleman, who is leading the project.

“Anchored by ALMA, the EHT will open a new window onto black hole research and bring into focus one of the only places in the Universe where Einstein’s theories may break down: at the event horizon.”

By combining the data from all these telescopes into a single image, the scientists are effectively creating a single radio-telescope as big as the Earth. This technique is called interferometry.

Which ought to be just about big enough to spot what they are hoping to see.

The black hole at the center of our galaxy, known as Sagittarius A, is estimated to be about 30 times the sun’s diameter and a staggering 4.3 million times the sun’s mass.  But the center of the Galaxy is about 26,000 light years from Earth. Focusing on the black hole is comparable to using a telescope in New York City to look at a quarter someone is holding in Los Angeles—and being able to read the date on the coin.

What the @ehtelescope expects to find in 2018 – a silhouette in the glow of radiation at the center of the Milky Way Galaxy. Simulation by 2017 Jansky Fellow Kazunori Akiyama. pic.twitter.com/H0Nz6RRjj9

As tiny a speck as Sagittarius A might appear to be from Earth, seeing it should still be possible, because the telescopes in question can focus on wavelengths down to a millimeter.

“For decades radio interferometry has been done at centimeter wavelengths using telescopes spread across continents,” said Professor Brown. “However, if you do the same observations at millimeter wavelengths then you can produce images with better resolution, and see (in silhouette) the black hole at the center of our galaxy.”

A telescope using light could not hope to see through the swirling clouds of dust and gas surrounding the black hole, nor pierce the galactic debris floating through the intervening space. However, radio telescopes “see” much shorter wavelengths.

This video shows a simulation of a #blackhole as it would appear at different frequency/wavelength of light. Around 1 mm wavelength, the accretion disk becomes transparent and we can see the black hole silhouette, which is optimal for EHT observations. Credit: Chi-Kwan Chan pic.twitter.com/Pkztme7s4V

“One nice thing about millimeter wavelengths is, compared to visible light, it is not greatly impacted by the interstellar dust between us and the center of the galaxy,” Professor Brown explained. “Basically the wavelength of the light is so much bigger than the dust particles that it travels past them.”

The group of scientists Shep Doeleman leads has been working on the project for more than a decade. As the software has improved and the hardware has multiplied—as more telescopes have joined—the group is getting increasingly sharp images of the galaxy’s heart.

“We have every expectation that we are just going to get fantastic data,” said Dr. Avery Broderick, whose work on the project is supported by the Perimeter Institute for Theoretical Physics.

Thank you so much I will consider making an outreach video. Please check out a VR movie made by my student which shows how things look like around a black hole when an observer is very close to it. It is also fun. https://t.co/kinIFz4rBY

Reams of Data and Months of Calculating

The team has actually focused on two different black holes, one in the galaxy’s center and another, farther away, in the center of Galaxy Messier 87 (M87) While M87 is 53.5 million light-years from Earth, the galaxy’s central black hole is more than 2,000 times bigger than the Milky Way’s, so it should be visible.

The team started gathering data in April and processing data all year. The data from the South Pole observatory was not collected until November.  Each telescope produces so much data it cannot be uploaded and downloaded on the internet. The data storage units have to be physically retrieved and carried to one of the two processing sights—one at the Massachusetts Institute of Technology’s Haystack Observatory VLBI correlator, and another in Germany.

Soon@M87 workshop: My simulation of the relativistic jet from the supermassive black hole in the core of M87 galaxy. pic.twitter.com/PCJZKRuyUP

Very Long Baseline Interferometry (VLBI) is the process of combining signals from different radio-telescopes to provide a single image. It is central to the EHT project. First tested successfully at the Atacama Large Millimeter/submillimeter Array (ALMA) and the APEX (Atacama Pathfinder Experiment) Telescope on Chile’s Atacama Plateau in January 2015, the technique demands remarkable precision.

In order to coordinate all the data perfectly, the group had to install an incredibly precise atomic clock at ALMA’s Array Operations Site, home to the observatory’s supercomputing correlator.  This upgrade, which happened in 2014, centers on a custom-built timepiece powered by a hydrogen maser which is ten times as precise as its predecessor, a rubidium-gas-powered model—which was incredibly precise to begin with.