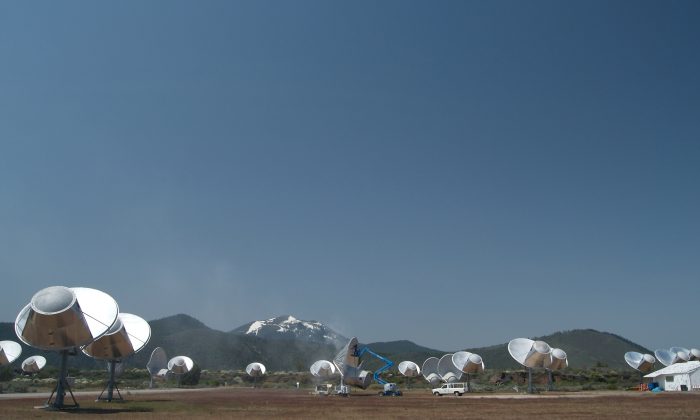 Researchers with the SETI Institute (search for extraterrestrial intelligence) are looking at potential radio signals coming from a star system that has been hypothesized to contain an “alien megastructure.”

Astronomers are using the Allen Telescope Array, a system of radio dishes located in Northern California, to hunt signals from near KIC 8462852, a star that is located 1,500 light-years from Earth.

The star is so unlike anything scientists have seen.

Astronomers have spotted strange blobs around the star, which block out some of the light. They don’t seem to be planets because they follow a seemingly random pattern. They also seem to be various shapes, not round. The idea is that these blobs could be part of a constructed megastructure.

“We are looking at it with the Allen Telescope Array [ATA],” said Seth Shostak, who is a senior astronomer at the SETI Institute in Mountain View, Calif., according to Space.com.

But he added that people “should perhaps moderate their enthusiasm with the lessons of history.”

In a news release published Oct. 22, SETI said it has been using the telescope to observe the system over a wide range of radio frequencies.

“But more to the point, any signals detectable here on Earth would have to be exceptionally powerful,” the news release said.

Shostak and his colleagues said KIC 8462852 is far from the only lead they’ll be hunting down in the next several years.

“It almost doesn’t matter where you point your telescope, because there are planets everywhere,” Shostak added. “If there’s somebody out there, there are going to be so many of them out there that I do think there’s a chance.”

Regarding the media coverage on the “alien megastructure,” Penn State astronomer Kimberly Cartier told Business Insider that it’s “gotten out of hand.”

She also noted: “Just to clarify, neither [my colleague] Jason [Wright] or myself … are advocating that it is an alien megastructure, but we also can’t completely rule it out.”