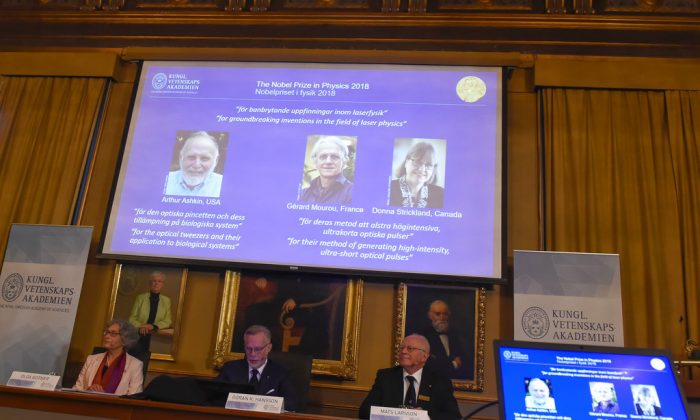 The Nobel Prize laureates for physics 2018 shown on the screen from left, Arthur Ashkin of the United States, Gerard Mourou of France and Donna Strickland of Canada during the announcement at the Royal Swedish Academy of Sciences in Stockholm, Sweden, on Oct. 2, 2018. (Hanna Franzen/TT via AP)
Science News

Scientists From US, France, Canada Win Nobel for Laser Work

STOCKHOLM—Three scientists from the United States, Canada, and France won the Nobel Prize in physics on Oct. 2, for work with lasers described as revolutionary and bringing science fiction into reality.

The American, Arthur Ashkin of Bell Laboratories in New Jersey, entered the record books of the Nobel Prizes by becoming the oldest laureate at age 96. Donna Strickland, of the University of Waterloo in Canada, became the first woman to win a Nobel in three years and is only the third to have won the prize for physics.

Frenchman Gerard Mourou of the Ecole Polytechnique and University of Michigan will share half of the 9 million kronor ($1.01 million) the prize carries with Strickland; Ashkin gets the other half.

Sweden’s Royal Academy of Sciences, which chose the winners, said Ashkin’s development of “optical tweezers” that can grab tiny particles such as viruses without damaging them realized “an old dream of science fiction—using the radiation pressure of light to move physical objects.”

The tweezers are “extremely important for measuring small forces on individual molecules, small objects, and this has been very interesting in biology, to understand how things like muscle tissue work, what are the molecule motors behind the muscle tissue,” said David Haviland of the academy’s Nobel committee.

Strickland and Mourou helped develop short and intense laser pulses that have broad industrial and medical applications, including laser eye surgery and highly precise machine cutting. The academy said their 1985 article on the technique was “revolutionary.”

“With the technique we have developed, laser power has been increased about a million times, maybe even a billion,” Mourou said in a video statement released by Ecole Polytechnique.

Michael Moloney, CEO of the American Institute of Physics, praised all the laureates.

He credited the work of all three with “expanding what is possible at the extremes of time, space and forms of matter.”

Ashkin’s tweezers can be used to hold and manipulate proteins, DNA and other biomolecules to study their mechanical properties or stimulate them, said Erwin Peterman, a physicist at Vrije Universiteit Amsterdam, who called the award “a great recognition for this visionary scientist who was ahead of his time.”

On Monday, American James Allison and Japan’s Tasuku Honjo won the Nobel medicine prize for groundbreaking work in fighting cancer with the body’s own immune system.