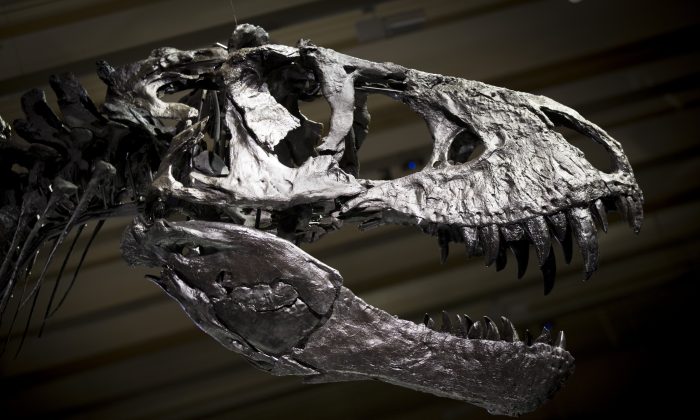 The skeleton of Tristan the Tyrannosaurus Rex seen during a media preview at the Museum fuer Naturkunde (Natural History Museum) on December 16, 2015 in Berlin, Germany. (Axel Schmidt/Getty Images)
archaeology

Is that giant Tyrannosaurus rex fossil you saw at the museum a male or a female? Even for paleontologists who devote their lives to studying dinosaur fossils, it’s a tough call, because the bones themselves rarely give away a dinosaur’s sex.

“It’s a dirty secret, but we know next to nothing about sex-linked traits in extinct dinosaurs. Dinosaurs weren’t shy about sexual signaling, all those bells and whistles, horns, crests, and frills, and yet we just haven’t had a reliable way to tell males from females,” said Lindsay Zanno, a paleontologist at the North Carolina Museum of Natural Science, in a statement.

Now that we can show pregnant dinosaurs have a chemical fingerprint, we need a concerted effort to find more.
— Lindsay Zanno, paleontologist

In 2005, researchers from North Carolina State University thought they found a medullary bone belong to a 68 million year old T-rex. The medullary bone itself was embedded inside the femur bone.

The medullary bone only appears among female birds during the period that it lays its eggs, and is chemically distinct from other types of bones.

Now, a chemical analysis confirms what the researchers had suspected, detecting keratan sulfate in the T-rex fossil, the same substance found in medullary tissue from ostrich and chicken bone.

The temporary nature of the medullary bone makes it difficult to find among fossils, and its discovery is a boon for scientists researching sexual differences among dinosaurs, and how they lay their eggs.

Exhibit Opens for Titanosaur, One of the Largest Dinosaurs Ever

“Just being able to identify a dinosaur definitively as a female opens up a whole new world of possibilities. Now that we can show pregnant dinosaurs have a chemical fingerprint, we need a concerted effort to find more,” Zanno said.

The visual evidence had already suggested that the femur did contain medullary tissue, but appearances can be misleading, and some diseases like osteopetrosis make it look like a male bird fossil had the same issue, making a chemical analysis necessary.