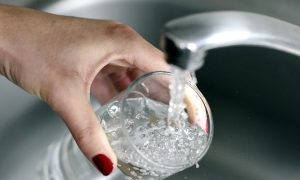 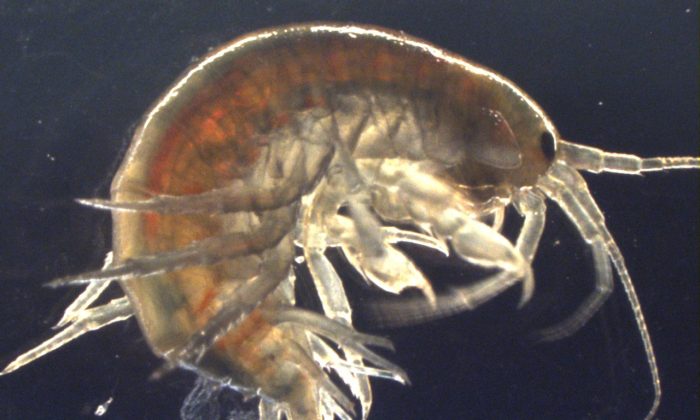 A freshwater shrimp (Gammarus pulex) studied by UK scientists, who found cocaine in all shrimp samples collected in Suffolk county in eastern England. The study, authored by researchers at King's College London and the University of Suffolk, was published on May 1, 2019. (King's College London)
UK

Scientists have found a wide range of chemicals, including pesticides and illicit drugs such as cocaine, in freshwater shrimp across the county of Suffolk, a rural area in eastern England. They were surprised to find cocaine in all the samples they tested. They said the party drug ketamine was also widespread.

Their study was published May 1 in the journal “Environment International.” Scientists said they had collected shrimp (Gammarus pulex) samples from five catchment areas and 15 different sites across Suffolk.

Researchers at King’s College London, in collaboration with the University of Suffolk, found cocaine in all the samples.

“Cocaine was found in all samples tested, and other illicit drugs such as ketamine, pesticides, and pharmaceuticals were also widespread in the shrimp that were collected,” the study said.

The study authors said that the findings of cocaine were not the shrimps’ fault—consumer products, medicines, and drugs, made up of thousands of different chemicals, can end up in rivers after use and can cause environmental damage.

“Although concentrations were low, we were able to identify compounds that might be of concern to the environment and crucially, which might pose a risk to wildlife,” lead author Thomas Miller from King’s College London said in a press release.

“As part of our ongoing work, we found that the most frequently detected compounds were illicit drugs, including cocaine and ketamine and a banned pesticide, fenuron. Although for many of these, the potential for any effect is likely to be low,” Miller added.

Leon Barron from King’s College London said in the press release that he was surprised at “such regular occurrence of illicit drugs.”

“We might expect to see these in urban areas such as London, but not in smaller and more rural catchments,” he said.

He also didn’t know where the cocaine and the pesticides came from.

“The presence of pesticides which have long been banned in the UK also poses a particular challenge as the sources of these remains unclear,” Barron said.

Nic Bury from the University of Suffolk said the question of whether cocaine in aquatic wildlife is a more widespread issue would warrant further research.

“Environmental health has attracted much attention from the public due to challenges associated with climate change and microplastic pollution,” he said in the press release.

“However, the impact of ‘invisible’ chemical pollution (such as drugs) on wildlife health needs more focus in the UK as policy can often be informed by studies such as these.”

The case recalls a recent case of gel found in commercial shrimp harvested in China.

The allegations by investigative journalists are that unscrupulous seafood dealers inject shrimp with gel to make them heavier and so able to generate a greater profit.

Such gel, the presence of which is not typically detectable upon superficial inspection, is injected some time between when the shrimp are caught and when they’re sold.

Mr. Zhang, a seafood merchant in Shandong Province, told Chinese media that large shrimp such as Penaeus and tiger prawns, which are mostly imported from Southeast Asia, are candidates for injection because of their size. “Their individual prices are high, and more money could be extracted from adding to their weight.”

Wu Wenhui, a professor at Shanghai Ocean University, said in an interview in Chinese press that customers should be wary about industrial gel ending up in shrimp, given that it’s cheaper than the edible version. “Industrial gel is used for furniture, print, and contains many heavy metals such as lead and mercury, which harms the liver and blood, and is even carcinogenic.”

Besides the questionable composition of the gel itself, the act of injection is itself potentially unsafe.

“Even if what was injected was edible gel, which may not itself be harmful, who can guarantee that the process is aseptic? ” said Liu Huiping, a member of the executive council of the Tianjin aquatic products association, in an interview with Beijing News.

Commentary articles in the Beijing Youth Daily point out that this scandal exposes the ineffectiveness of China’s food regulation system.

“We do know that they are struggling with food safety regulation in China, and there are constant stories written about food safety problems,” said Lovera in a phone interview. “Our FDA, they have an office in China, but they don’t get out very much to do a lot of inspections. A couple hundred inspections a year is nothing compared to how many food operations are out there.”

Lovera also mentioned the FDA’s lack of manpower for inspecting food imports. “They don’t have very much inspection at the border here when it’s coming in. They will get less than 2 percent of what’s coming in, so importers will take their chances sometimes. … They might try to send in something that’s not okay,” she said.