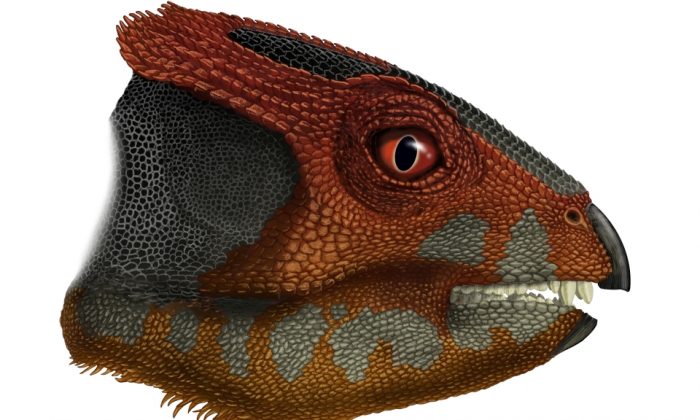 A new dinosaur has been discovered that stood on its hind feet and was about the size of a spaniel.

The species of plant-eating dinosaur was discovered by researchers at the George Washington University and Chinese Academy of Sciences in Zingjiang Province, China.

The Hualianceratops may be related to the Triceratops, the scientists said in the announcement. The findings were published this week in the PLOS ONE online journal.

The Hualianceratops lived approximately 160 million years ago, early in the Late Jurassic Period.

“Identifying Hualianceratops allows us to expand the beaked family of dinosaurs (Ceratopsia), which includes popular species like Triceratops and Psittacosaurus,” said Fenglu Han, a postdoctoral student in the School of Earth Sciences at China University of Geosciences and lead author of the paper, in the announcement.

“Now we know the horned dinosaurs thrived in the early Late Jurassic, and they coexisted with Guanlong, which was an early relative of T. rex and maybe threatened them.”

The name comes from a combination of features—”Hualian” means ornamental face, referring to the texture found on most part of the skull, combined with ceratops (horned face) from the Greek, a common suffix for horned dinosaurs; while “wucaiwan” (Chinese for five color bay) comes from the area where the specimen was discovered.

Fossils found include teeth and leg bones. They were found in the same area that the researchers found the Yinlong, a similar dinosaur, in 2002.