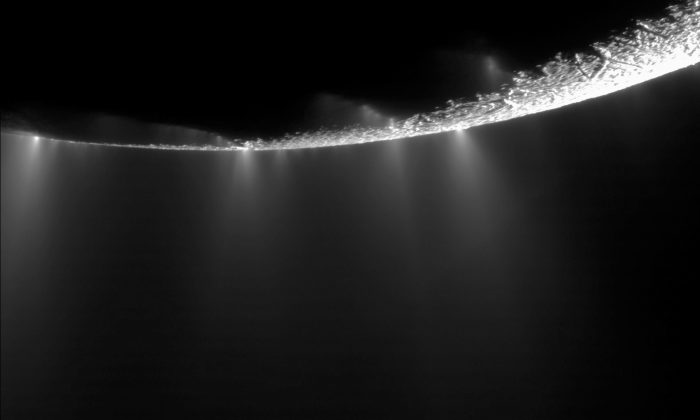 This photo provided by NASA shows water vapor jets, emitted from the southern polar region of Saturn's moon Enceladus. Scientists have uncovered a vast ocean beneath the icy surface of the moon, they announced Thursday, April 3, 2014. Italian and American researchers made the discovery using Cassini, a NASA-European spacecraft still exploring Saturn and its rings 17 years after its launch from Cape Canaveral. (AP Photo/NASA, JPL, Caltec, Space Science Institute)
Science

Scientists Dig Deep in Their Search for Water on the Moon

One of the main aims of the Apollo missions of the 1960s was to determine whether the moon had any water on it. If man were to build a colony on the moon, having water present would make living there easier.

The discovery that Apollo found small quantities of water on the moon was met with great joy. But that didn’t last for long. Further analysis revealed that the isotopic composition of that water looked just like that on Earth, which was bad news.

Water is made up hydrogen and oxygen, which have different types of isotopes determined by the number of neutrons in each atom. The assumption was that water on different celestial bodies would have different isotopic signatures. But they weren’t different, which made scientists assume that, while analysing the samples on Earth, terrestrial water may have ended up in lunar samples. Hence they dubbed the moon to be “bone-dry”.

But then, in the 1990s, two independent missions Clementine and Lunar Prospector hinted that there might be water ice on the lunar surface, especially at lunar poles.

This polar water on the moon was confirmed by American space agency NASA’s LCROSS mission in 2010. Then, another exciting discovery came about through NASA’s Moon Mineralogy Mapper (M3) instrument onboard India’s Chandrayaan-1 mission which confirmed the presence of water not just on the poles, but everywhere.

Finding water and water-ice on the surface of the moon was like turning on a light bulb for lunar geochemists who began to realise that if there is water on the surface, there is a good chance it is also in the rocks. It took almost 40 years after Apollo missions, when in 2008 a team from Brown University led by Alberto Saal found water (still in relatively small quantities at levels of up to 46 parts per million) in lunar glass beads. These glass beads are formed when the magma melt cools suddenly, and they are found in the interior of the moon.

While the amount of water in the glass beads is small, it indicates that at the time the glass beads were formed the amount of water on the moon would have been comparable to those found in basalts on Earth (nearly 260 parts per million). This finding changed how lunar researchers thought about the moon. Some portions of the moon, it seemed, were as wet as some parts of the Earth’s interior.

Also, the volcanic glasses analysed by Saal and his team were from a lunar soil sample and, in general, volcanic glass makes up a small proportion of the returned sample set. Our research team followed up on this by looking at mineral apatite, which is known in terrestrial rocks to contain water and some other volatiles. (It is a calcium phosphate mineral and locks water into its crystal structure.)

And we, too, were successful in finding water in lunar apatites. This is an important finding since we now know that apatite is the only known water-containing mineral in lunar samples and is ubiquitous to almost all lunar rock types.

The jury is out at the moment about the source or sources of lunar water as scientists try to make new measurements. One thing is certain – our understanding of water in and on the moon is far from complete.

This work will be presented at the 2nd European Lunar Symposium in London. Mahesh Anand receives funding from Science and Technology Facilities Council. He is affiliated with Natural History Museum, London as a Scientific Associate. James Mortimer, Jessica Barnes, and Romain Tartese do not work for, consult to, own shares in or receive funding from any company or organisation that would benefit from this article. They also have no relevant affiliations. This article was originally published on The Conversation. Read the original article.