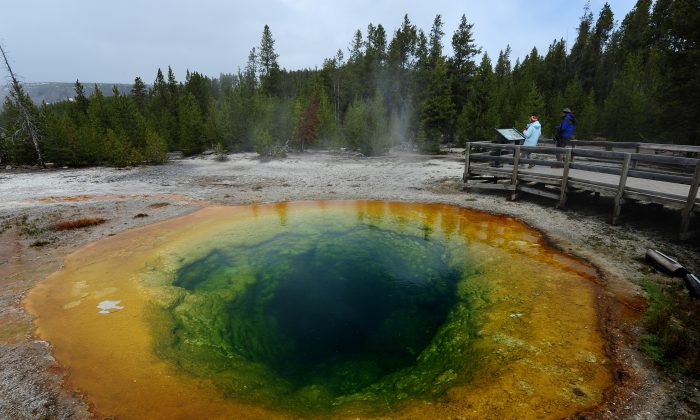 Hundreds of small earthquakes were detected over just 10 days in the Yellowstone supervolcano area, in a report issued just a short time after scientists said the magma chamber underneath the ground is “under strain.”

The swarm of small temblors was detected by the U.S. Geological Survey and started on Feb. 8 in a region roughly eight miles northeast of West Yellowstone in Montana.

The area of the swarm is in the same region as the Maple Creek swarm, which started in June 2017 and featured around 2,400 earthquakes through September.

Researchers said in a bulletin that the swarm appears to be normal activity and does not indicate anything related to the supervolcano lying beneath the surface of one of America’s most popular national parks.

“The current and past earthquake swarms reflect the geology of the region, which contains numerous faults, as well as fluids that are constantly in motion beneath the surface. This combination of existing faults and fluid migration, plus the fact that the region is probably still ‘feeling’ the stress effects of the 1959 earthquake, contribute to making this area a hotbed of seismicity and swarm activity,” they wrote.

The current volcano alert level at the survey’s Yellowstone Volcano Observatory is “normal.”

Just a week ago, two nonprofit researchers said that the magma underneath the surface at Yellowstone is “under strain.”

David Mencin and Glen Mattioli, geodesists with UNAVCO, Inc., a nonprofit based in Boulder, Colorado, help to measure ground movement in the area.

Using instruments, they found that there is a zone of semi-molten rock starting about 3 miles below the surface.

However, they did stress that the strain doesn’t mean people should be alarmed.

“We all know what it is like to experience strain. The pressures of everyday life can leave you feeling contorted and stretched. Volcanoes are no different — they experience strain as well, and measuring that strain can help scientists understand a volcano’s activity,” they wrote in the Billings Gazette.

“Unlike you, when a volcano experiences strain it contorts or stretches. The very subtle change in shape of subsurface rock is called deformation. It can be caused by a variety of forces, including changes in magma pressure or even in the amount of water in lakes at the surface.”