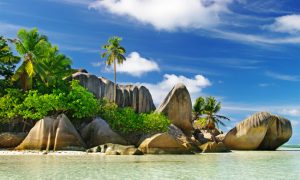 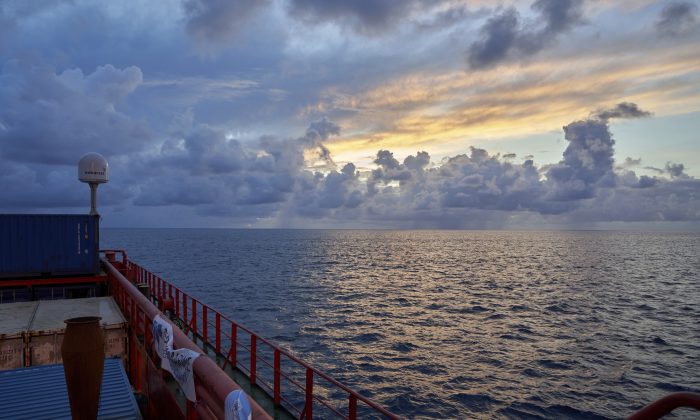 Sun rises near the tiny atoll of Alphonse where scientists onboard the Ocean Zephyr began exploring the depths of the Indian Ocean, Thursday March 7, 2019. The expedition is led by the Britain-based Nekton, an independent, non-profit research institute that works with the University of Oxford to increase scientific understanding of the oceans. (AP Photo/David Keyton)
Africa

ALPHONSE ATOLL, Seychelles—An unprecedented mission to explore the Indian Ocean and document changes taking place beneath the waves began its research on March 7, in the Seychelles waters.

The British-led Nekton Mission arrived off the tiny atoll of Alphonse in the early morning hours, after looming bad weather forced a change of plan and of route.

The ambitious expedition will delve into one of the last major unexplored frontiers on the planet. Understanding the Indian Ocean’s ecosystem is important not just for the species that live in it, but also for an estimated 2.5 billion people at home in the region—from East Africa to the Arabian peninsula, the Indian sub-continent and Southeast Asia.

Though the mission will use hi-tech submersibles in its work, research began on March 7 with more modest equipment: a device to measure the water’s chemistry and a Neuston net used to retrieve zooplankton.

“When you actually finally begin doing the science, it’s a bit of a relief and a lot of fun,” said Louise Allcock, a professor of zoology at the University of Ireland, in Galway.

Alphonse is a tiny atoll, the tip of a submerged mountain, 232 nautical miles southwest of the Seychelles’ capital Victoria. Within two miles of its shores, the ocean is as deep as 5,000 meters (3 miles).

Little is known about the biodiversity of Alphonse Atoll, as it remains unexplored beyond scuba depth.

Mission member Stephanie Marie is a marine researcher from the Seychelles. She recently spent a week on Alphonse working on a study of a fish species called the Giant Trevally, or GT. She says she is excited to find out what’s down there.

“When you have amazing weather, you have a lot of things to see, like the sharks, the GT, the corals also, so it’s like a different place, a different scenery every time,” she said.

Marie’s role is to collect zooplankton to conduct taxonomy identification.

“I’m really excited. It’s going to be eye-opening because I’ve never seen so deep,” she said. “It’s really important. Fish feed on zooplankton, so we need to see its quality, because if the ecosystems’ changes it may have an impact on the fish we feed on.”

The data will be used to help the Seychelles consolidate and expand its policy of protecting almost a third of its national waters by the year 2020. The sea area to be protected is larger than Germany. The initiative is a key component of the Seychelles “blue economy,” which attempts to balance development needs with those of the ocean environment.

The Associated Press is the only news agency working with British scientists from the Nekton research team on its deep-sea mission that aims to unlock the secrets of the Indian Ocean. AP video coverage will include exploring the depths of up to 300 meters (1,000 feet) off the coast of the Seychelles in two-person submarines which will search for underwater mountain ranges and previously undiscovered marine life, a behind-the-scenes look at life on board, interviews with researchers and aerial footage of the mission. The seven-week Seychelles expedition is expected to run until April 19.