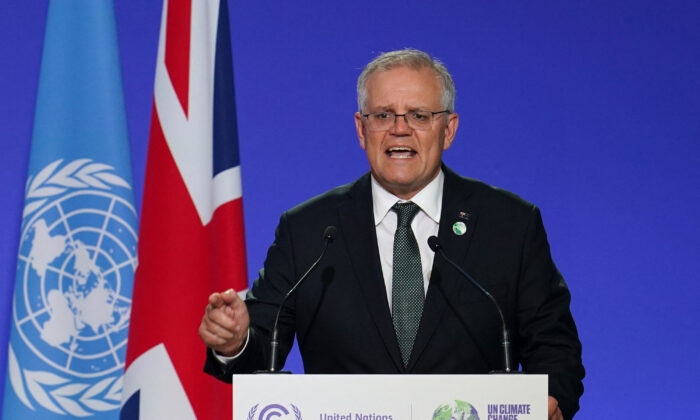 Scientists and Experts Will Solve Climate, Not Politicians: Australian PM

Australian Prime Minister Scott Morrison has told world leaders that the swift invention of COVID-19 vaccines has provided cause for optimism that scientists and other experts can invent the technological solutions needed to combat climate change by achieving net zero carbon emissions by 2050.

Addressing the COP26 summit in Glasgow early on Tuesday, Australian time, Morrison said the challenge to chart the path to net zero would be met by “those who are, frankly, largely not in this room.”

“It will be our scientists, our technologists, our engineers, our entrepreneurs, our industrialists, and our financiers that will actually chart the path to net zero,” he said. “And it is up to us as leaders of governments to back them in.”

The prime minister spoke of Australia’s plan to achieve a decarbonised economy through low-cost clean technology that doesn’t deny people, especially in developing economies, their livelihoods or the opportunity for a better quality of life.

“Driving down the cost of technology and enabling it to be adopted at scale is at the core of the Australian Way to reach our target of net zero emissions by 2050 that we are committing to at this COP26,” he said.

“Cleaner technology solutions must outcompete existing technologies if they are to be successful everywhere, and especially so in developing economies.

“Raising the cost of energy just impacts on those who can afford it least,” he said.

Morrison pointed to the swift invention of COVID-19 vaccines and the immunisation of billions just 18 months after the pandemic first emerged as proof of the capacity of experts to find solutions to global problems.

Australia has surpassed the goals of like counties, having already reduced emissions by more than 20 percent since 2005. It projects that emissions will fall by 35 percent by 2030, which Morrison said far exceeds its Paris commitment.

“Our researchers, scientists, entrepreneurs, investors and most importantly, our people are ready. The Australian way is to bet on them—and we think that’s a good bet.

Modelled on the coalition’s emissions reduction fund, the scheme “is designed to develop a high-integrity carbon offset scheme in the Indo-Pacific region”.

“The partnership will see our two countries share expertise to ensure Fiji is internationally recognised as a source of high-integrity carbon mitigation outcomes,” Morrison said in a statement.