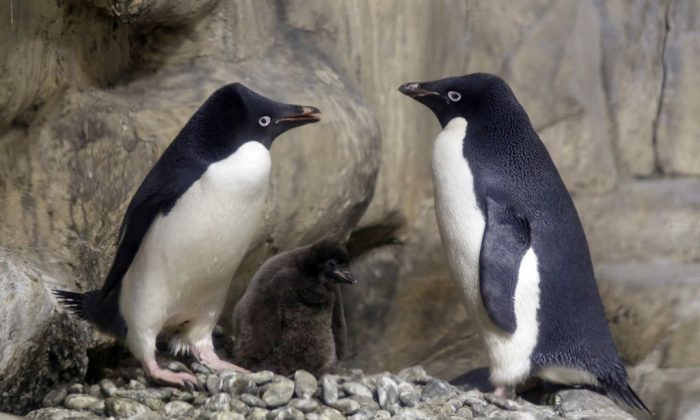 An Adelie Penguin chick less than a month old, is protected by its parents while remaining in a recreated antarctic environment in the zoo of Guadalajara, Jalisco state, Mexico on Jan. 17, 2018. (Ulises Ruiz/AFP/Getty Images)
International

The colony of Adélie penguins was discovered thriving on Danger Islands, on the Antarctic Peninsula’s northern tip. Islands in the area are remote and surrounded by ice. The finding reverses scientists’ previous notion that the species was declining, The Independent reported.

“Until recently, the Danger Islands weren’t known to be an important penguin habitat,” said Professor Heather Lynch, co-leader of the team that made the discovery, via The Independent.

Scientists’ curiosity was piqued when they spotted guano stains from images via NASA satellites. They then visited the islands to look for the penguins that caused them, and to record their numbers, The Independent reported.

“And the sheer size of what we were looking at took our breath away,” said Lynch, via BBC. “We thought, ‘Wow! If what we’re seeing is true, these are going to be some of the largest Adélie penguin colonies in the world, and it’s going to be well worth our while sending in an expedition to count them properly.”

They made observations from the ground and used drones to observe the penguins from the sky. They found 751,527 penguin pairs, higher numbers than the entire Antarctic Peninsula combined, according to The Independent. They published their findings via Scientific Reports.

“The water around the island boiled with penguins,” said Professor Michael Polito, an ecologist at the Louisiana State University, via The Independent.