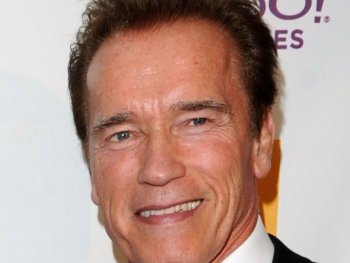 Former California Governor Arnold Schwarzenegger poses during the 14th annual Hollywood Awards Gala at The Beverly Hilton Hotel on Oct. 25, 2010. Having completed his term in office on Jan. 3, Schwarzenegger is set to embark on a series of public speaking (Jason Merritt/Getty Images )
US

Schwarzenegger to Do Canadian Speaking Tour

Joan Delaney
Senior Editor, Canadian Edition
Joan Delaney is Senior Editor of the Canadian edition of The Epoch Times based in Toronto. She has been with The Epoch Times in various roles since 2004.
View profile
Follow
biggersmaller
Print
Now that Arnold Schwarzenegger has completed his term in office, the former California governor is hitting the speech circuit.

His first formal public speaking engagements are scheduled for Canada later this month, with stops in Calgary, Winnipeg, Toronto, and Montreal.

Schwarzenegger, 63, will talk about green technologies and about his career in politics, movies, and bodybuilding.

“Arnold Schwarzenegger is a truly iconic global figure with an incredible life story,” conference organizer tinePublic Inc. said in a press release. “Canadian audiences will be the first to be inspired by this truly amazing story.”

On Jan. 27 in Montreal, the former actor will give a speech titled “Will innovation and green technologies save the global economy?”

“After Bill Clinton, Tony Blair, George W. Bush, Alan Greenspan, and Sir Richard Branson, we are proud to welcome Mr. Arnold Schwarzenegger to our forum,” Michel Leblanc, president and CEO of the Board of Trade Metropolitan Montreal, said in a release.

“From his experience in American politics to his efforts combating climate change, Schwarzenegger incarnates openness to change and the boldness of innovative solutions,” added Leblanc.

When Schwarzenegger, who left office on Jan. 3, first arrived in the U.S. from Austria as a young man he owned little else but his gym bag. He went on to become a world-famous bodybuilder, winning seven Mr. Olympia titles and a Mr. Universe championship.

He then turned to acting, and became famous for his roles in movies such as “The Terminator” series, “The Last Action Hero,” and “Total Recall.”

He left his acting career for politics, becoming the 38th governor of California in 2003. However, while in office, he played cameos in “The Expendables” and “Terminator Salvation,” according to Contactmusic.com.

In a recent interview with Variety, Schwarzenegger said a return to acting was just one of the many things he could do after he steps down as governor.

However, he scotched rumours that he is set to take the helm as chief of the Motion Picture Association of America.