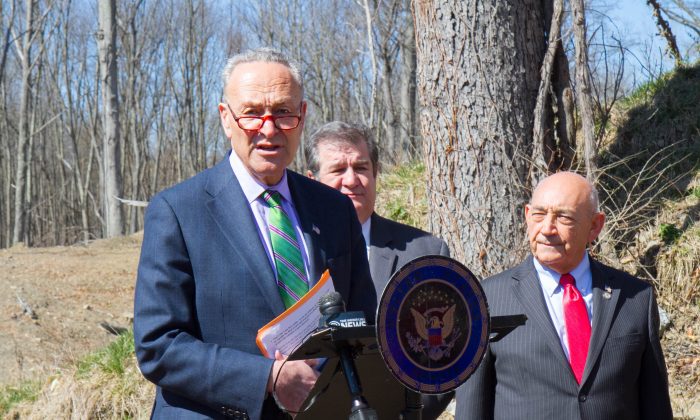 GOSHEN—New York Senator Charles Schumer says he is all about jobs, which is why he is pushing the Army Corps of Engineers to expedite the approval process for Amy’s Kitchen to start building their new food manufacturing plant in Goshen.

“Amy’s Kitchen will not only bring close to 1,000 jobs themselves, but they will bring other food companies—when somebody as reputable as Amy’s comes, others will follow,” he said at a press conference on March 29 at the site where Amy’s Kitchen plans to build their plant.

Amy’s Kitchen, an organic, pre-made frozen food business, says on its scoping document submitted to the Goshen Town Planning Board it plans to employ about 681 people in their food manufacturing plant. The other jobs Schumer touted would be ancillary, like the farmers who would supply the food and the drivers who would distribute it.

Because the property Amy’s is planning to build on has wetlands, the Army Corps of Engineers has to approve Amy’s plan before it can start building. Schumer, who knows Amy’s owners, the Berliners, said they are “pro-environment” and have gone “above and beyond” the call of duty to ensure their operations have “minimal impact” on the environment.

Amy’s Kitchen will not only bring close to 1,000 jobs themselves, but they will bring other food companies.
— Charles Schumer, New York Senator

“The Army Corps must do a thorough review and ensure the integrity of the community. We just want them to do it fast,” he said.

Amy’s submitted its revised wetland delineation drawings to the Army Corps two weeks ago, said Amy’s attorney, Larry Wolinsky, and he doesn’t anticipate the process taking more than a month for a project like this.

The Army Corps declined to give a timetable.

“We appreciate Sen. Schumer’s support and continued interest in this matter,” the Corps said in an emailed statement. “We are in the process of reviewing them [the drawings] for accuracy and coordinating with our higher headquarters as well as our partners at EPA.”

Phil Dropkin, the project manager, said all levels of government have been “super” so far and the Army Corps has been “very cooperative.”

He said the wetlands are a small part of the 374-acre parcel and he does not see them being a big issue in moving the project forward.

“There’s almost no disturbance posed to any wetlands,” he said. “Chuck [Schumer], he wants to support the project so he came out today.”

Amy’s is scheduled to go before the planning board March 29 and, if all goes well, start construction later this year and be operating by 2018.