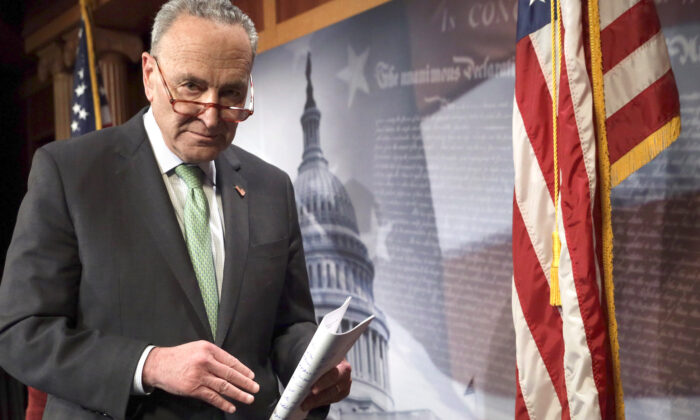 Senate Minority Leader Chuck Schumer (D-N.Y.) on Tuesday morning said he believes the Senate will pass a small business bill today, with both Republicans and Democrats showing agreement on most issues.

The bill, if passed, would be the fourth stimulus package intended to offset economic losses during the Chinese Communist Party (CCP) virus pandemic. Congress and the federal government have been under pressure to pass legislation to infuse the third stimulus package’s Paycheck Protection Program (PPP) for small business owners that ran out of money last week.

Schumer told CNN that he spoke “past midnight” with Treasury Secretary Steven Mnuchin, White House chief of staff Mark Meadows, and House Speaker Nancy Pelosi (D-Calif.) about the bill, and the four officials “came to an agreement on just about every issue.”

“Staff were up all night, writing. There’s still a few more Is to dot and Ts to cross, but we have a deal. And I believe we’ll pass it today,” Schumer added.

“We insisted that a chunk of the money be separate from the competition with the bigger companies, you know the ones that have two, three, 400 people and a relationship with the banks, and we got $125 billion that will go exclusively to the unbanked,” Schumer added. “To the minorities, to the rural areas, and to all of those little mom and pop stores that don’t have a good banking connection and need the help.”

Democrats have also been calling for more aid to state and local governments to deal with the CCP virus crisis.

In the CNN interview, Schumer said a national CCP virus testing plan will be part of the next package.

“To get the kinds of testing that is done, to get the contact tracing, to make the tests free, you need a significant federal involvement, you need a national strategy, and [President Donald Trump] and Mnuchin and Meadows agreed to that, to their credit,” he said.

Over the weekend, Pelosi said she had spoken with Mnuchin before the two came to an agreement on replenishing the PPP fund.

“We want to add more money there,” Pelosi told Chris Wallace on “Fox News Sunday.” She added, “It is very urgent, though, that we support our police and fire, our health care workers, our nurses, our teachers.

Mnuchin and SBA Administrator Jovita Carranza said last Thursday that no new loan approvals can be sent out after funds are exhausted, saying that a significant amount of loans have been doled out in recent days.

“The SBA has processed more than 14 years’ worth of loans in less than 14 days,” the two officials said in a joint statement, while calling on Congress to infuse the program with more funds because it’s “saving millions of jobs and helping America’s small businesses make it through this challenging time.”