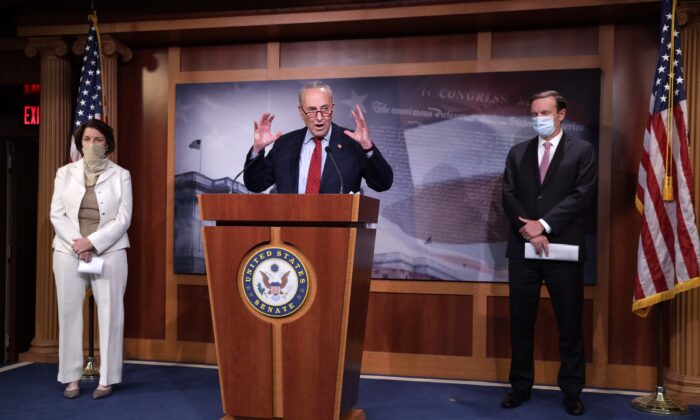 Key Democrats on the Rules Committee on Wednesday called for stricter measures to prevent spread of the CCP virus in the Senate complex, calling for a testing program.

Senate Minority Leader Charles Schumer (D-N.Y.) and Sen. Amy Klobuchar (D-Minn.) introduced a resolution that would require implementing the CDC’s social distancing and mask-wearing guidelines in Senate office buildings and in the Senate-side of the Capitol, and a “robust” testing and contact-tracing program.

“The U.S. Senate has become a COVID-19 hot spot and we need to take immediate action, guided by the best science, to put in place additional protections to safeguard the health of the Senate complex workers, Senate staff, and senators,” Schumer said in a joint statement.

Schumer called on Republicans to acknowledge the danger and join in preventing the spread of the virus.

Klobuchar said that it has been her goal since the beginning of the pandemic to make sure the legislature can function safely.

“This resolution will require mandatory masks and a reliable testing protocol in the Senate. These are common-sense measures our government must have in place to protect the Senate community, including our staff, and to fully function during this pandemic,” Klobuchar said in the statement.

Besides universal mask-wearing, the resolution calls for regular testing in the capitol complex and contact-tracing protocols. It would require anyone who knows they have been exposed to the virus to quarantine for 14 days.

It also calls for those who test positive to quarantine for at least 10 days following the appearance of symptoms and having not had a fever for 24 hours, before being allowed to return to the Capitol complex, they would have to have two separate negative test results on two different days.

The Democrats’ demands for improved health protocols come after three Republican senators tested positive for the CCP virus, and another three are quarantining due to exposure to their colleagues.

To date, 18 senators have quarantined and of those, five are known to have tested positive for the CCP virus this year: Sens. Rand Paul (R-Ky.), Bill Cassidy (R-La.), Mike Lee (R-Utah), Thom Tillis (R-N.C.), and Ron Johnson (R-Wis.).

House Speaker Nancy Pelosi (D-Calif.) said in a recent interview that there are tests available on Capitol Hill for those needing them, but regular testing for the thousands of Capitol Hill employees is not yet possible.

Senate Majority Leader Mitch McConnell (R-Ky.) and Pelosi in May rejected an offer from the White House for rapid testing for lawmakers, arguing that resources should go toward those on the front lines.

McConnell’s office did not immediately respond to The Epoch Times’ request for comment.

Schumer and Klobuchar have also criticized Republican senators for pushing forward with the Senate Supreme Court confirmation hearings for Judge Amy Coney Barrett given that a number of White House officials and senators have recently tested positive for the virus.

Schumer has publicly admonished the GOP leadership for proceeding with the confirmation hearings.

“The Republican leadership has truly lost touch with reality if it’s contemplating marching COVID-stricken members to the Senate to rush through a Supreme Court nominee,” Schumer wrote.

I feel fine and look forward to the hearing for Judge Amy Coney Barrett on Oct. 12.

Any Senator who wants to participate virtually will be allowed to do so.

Despite the calls from Senate Democrats to halt Barrett’s confirmation hearing, Senate Judiciary Committee Chairman Lindsey Graham (R-S.C.) reiterated Oct. 3 that the hearing to consider the nomination of Barrett will remain scheduled for Oct. 12, and that any senator “who wants to participate virtually will be allowed to do so” in light of the recent COVID-19 infections on Capitol Hill.