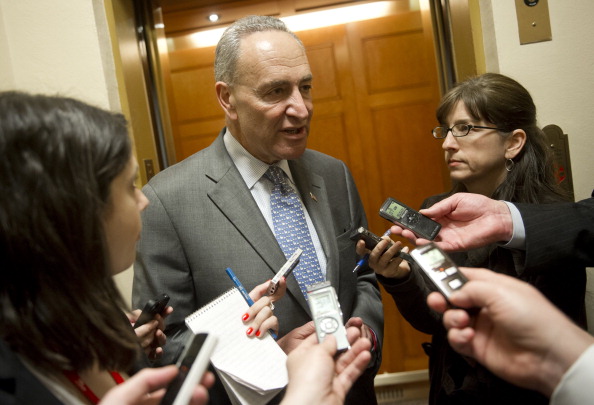 “Given the facts that I’ve seen, it would be appropriate to use the death penalty in this case and I hope they would apply it in federal court,” the Democratic lawmaker told CNN’s “State of the Union.”

The death penalty is not legal in Massachusetts but can be used at the federal level in some instances.

“The federal law allows the death penalty,” Schumer said. “I wrote the law in 1994 when I was head of the crime subcommittee in the House. This is just the kind of case that it should be applied to.”

Sen. Dianne Feinstein, a Democrat from California, also indicated that the death penalty is necessary in Tsarnaev’s case.

“I think there’s going to be a great deal of evidence put together to be able to convict him, and it should likely be a death penalty case under federal law,” she told ”Fox News Sunday.”

Massachusetts Sen. William “Mo” Cowan, a Democrat, said on “State of the Union” that he did not support the death penalty in this instance.

“I am not personally a proponent of the death penalty,” said Cowan. “But I will leave it to Attorney General [Eric] Holder to decide ultimately what needs to be done here, and I will support that.”

Over the weekend, Tsarnaev, 19, has remained in a Boston hospital and is said to be in serious condition. Federal prosecutors hope to charge him within the next few days or even Sunday at the minimum.

His older brother, 26-year-old Tamerlan Tsarnaev, was killed during a police shootout early on Friday morning.

The Boston Marathon bombings killed three people and wounded more than 170 others.