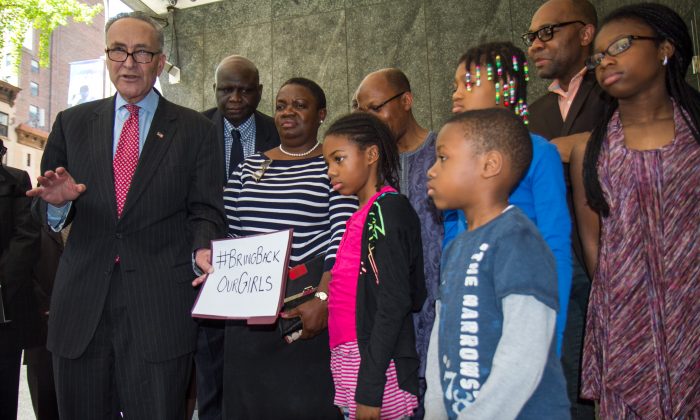 Sen. Charles Schumer holds a sign with children of Nigerian immigrants at a press conference outside the Nigerian consulate in New York on May 11, 2014. The sign references the 276 Nigerian girls who were kidnapped in Nigeria by Boko Haram, an Islamic militant group. (Ivan Pentchoukov/Epoch Times)
Africa

Schumer Calls for US Action in Nigerian Kidnappings

NEW YORK—Sen. Charles Schumer proposed measures on Sunday to aid the 276 Nigerian girls that have been kidnapped by Boko Haram, an Islamic terrorist group.

Schumer urged the State Department to offer rewards and refugee status to people who help in the rescue of the girls. He also proposed that anyone who is involved in buying or harming the girls be placed on the terrorist watch list.

“These terrorists are the worst of the worst. Imagine taking the flower of your nation and trying to destroy it,” Schumer said. “It’s one of the most despicable things a group can do.”

Schumer’s proposals can be enacted without legislative actions, since procedures for them already exist in the form of government programs.

The Terrorist Identities Datamart Environment, for example, would just need to be updated with the identities of those who sell or harm the kidnapped girls. The State Department, similarly, already has a program that offers rewards for information leading to the arrest and conviction of terrorists.

Schumer has already communicated the proposals to the White House and the State Department and said on Sunday that the response has been positive.

Schumer noted that the U.S. government has already taken significant steps to aid Nigeria in response to the kidnappings. But he cautioned that the Nigerian government’s response has been of concern and that the United States needs to do more.

“It’s a crying shame. It’s atrocious. It shouldn’t be happening. Our government should be doing more,” said Mary-Ann Etiebet, 40, a physician who immigrated to the United States in 1992.

One of Etiebet’s two girls, Tosan Okotieuro, 9, went to school in Nigeria for three years. She echoed several community leaders who blamed the Nigerian government for failing to protect the girls and rescue them.

“These girls are our future. The fact that hundreds of them can be abducted, and nobody make any noise for two to three weeks just shows how degraded our culture is becoming and how nonchalant we’re being about life,” Etiebet said.

There are more than 15,000 people of Nigerian origin living in New York City, according to 2012 data from the Census Bureau.

The Nigerian community is planning an event in New York City to bring attention to the problems in the country that have led to the kidnappings. The event, titled “For the Love of Nigeria,” will take place outside the Nigerian Consulate in East Midtown on May 23.

“Something led to the abduction of these girls, and that problem has not been solved,” said Janet Fashakin, 56, an attorney who emigrated from Nigeria. “If these girls are freed today, is that the end of the problem of Nigeria? No. We want to get to the root of our problem, and we want the world to help us.”