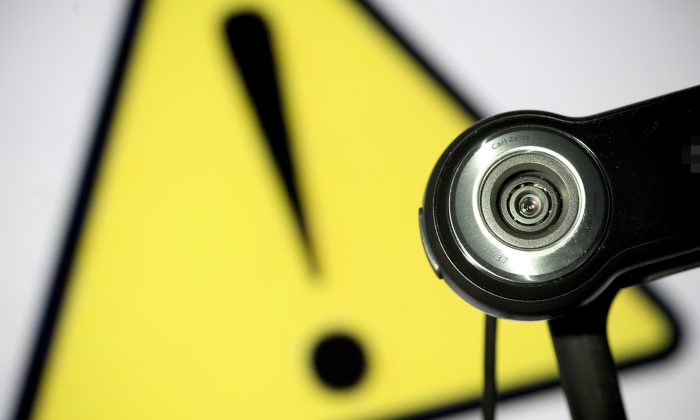 A webcam in front of a caution sign. (Lionel Bonaventure/AFP/Getty Images)
New York

Schumer called on manufacturers and the Federal Trade Commission to work together to insure that each user of video monitoring devices has a unique password to protect him or herself from hackers. This can be done by prompting users to pick a new password upon installing their devices akin to how smartphones work already, Schumer said.

The call for new information security measures was made in response to the discovery of a website last month that streamed videos from tens of thousands of private streams, including hundreds in the tri-state area.

“These hackers livestreamed these private feeds onto a private website … a baby fast asleep in its crib, a couple enjoying their breakfast, a person lying in bed, the inside of a school hallway,” Schumer said.

The security vulnerability was traced to the device manufacturer giving new users identical default passwords that many did not bother to change, giving hackers an easy backdoor to their streams.

“The current security loophole could expose tens of thousands of New Yorkers to voyeurism, robbery, and even blackmail,” Schumer said. “We’re simply asking that the manufactures of cameras, baby monitors, and webcams adopt improved security standards and close the major security loopholes that exist.”

The security breach has reportedly affected over 10,000 streams from hundreds of different countries, and the website administrator said he was motivated by his desire to show how vulnerable the existing security systems were.

According to the website, all private streams have since been removed and only public streams without public security are available, and streams can be removed upon an email request.

Schumer attributed the source of the website to “Russian hackers,” but in an email the administrator of the website denied being Russian, according to the BBC, and disputes being a hacker.

“These cameras are not hacked. Owners of these cameras use default passwords by unknown reason. There are a lot of ways to search such cameras in Internet using Google, search software, or specialized search sites,” the website states.

Schumer didn’t say that new legislation was needed, rather that the Federal Trade Commission could enforce new regulations with fines.

“We don’t want to abolish these devices, they’re good,” Schumer said. “But as technology advances, we have the technology bumping into privacy. The good news is—if we’re only a little careful, we can have both.”