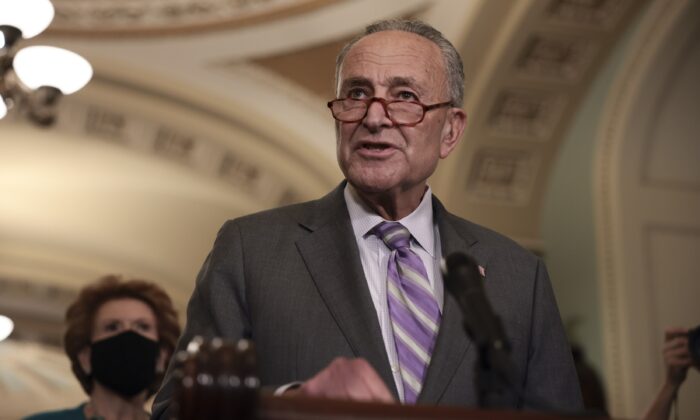 Senate Majority Leader Chuck Schumer (D-N.Y.) is pushing for the federal government to provide his state with at least $1.5 billion to deal with illegal guns.

Schumer said the Interstate Task Force on Illegal Guns, headed by New York Gov. Kathy Hochul, a Democrat, will only work if the Bureau of Alcohol, Tobacco, and Firearms (ATF) and other federal officials have the resources.

“The ABCs of beating back the scourge of gun violence depends on three federal letters: A, T, and F,” Schumer said during a Jan. 30 press conference in Manhattan.

“I am pushing for $1.5 billion dollars in federal funds for the agency, so they can help with this work and do much more at the national level. Without the $1.5 billion … these plans will not have their full impact, and we need full impact to address the flow of these crime guns in our communities and across our state.”

“If you don’t follow the law, you’re not going to serve in my police department,” he said on Jan. 30.

New York, along with Chicago and Los Angeles, has some of the strictest gun control laws in the United States. Before purchasing a firearm in the city, the buyer has to have a license for a handgun, shotgun, or rifle, while, in New York state, a buyer doesn’t need to have a permit to purchase a rifle or shotgun—only handguns.

In late November 2021, some members of the Supreme Court had pointed questions about the New York state law and similar laws in California, Maryland, and other states that sharply limit an individual’s ability to carry a gun outside of their home—suggesting that the high court may overturn the law.

“We are likely to see New York be forced to rewrite its law,” Adam Winkler, a law professor at the University of California–Los Angeles, told The New York Times in November 2021 regarding a pending Supreme Court decision. “We’ll have to wait until we see the court’s opinion before we know what’s constitutionally permissible.”