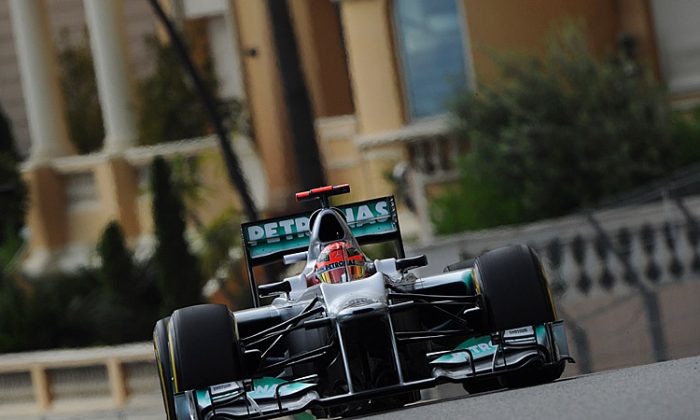 Lewis Hamilton of McLaren might have to overcome some set-up issues to be at his best in the race. (Mark Thompson/Getty Images)
Motorsports

Schumacher Fastest, Webber on Pole for Formula One Grand Prix of Monaco

Michael Schumacher set the quickest lap time in qualifying of the Formula One Grand Prix of Monaco, but because of a five-grid-spot penalty, the Mercedes driver will start sixth. Red Bull’s mark Webber will start from the pole in Sunday’s race.

Schumacher turned in a lap of 1:14.301 in the final seconds of qualifying, just after Webber had claimed the provisional pole with a lap of 1:14.381. The seven-time World Champion will be relegated to sixth on the grid for colliding with Williams driver Bruno Senna during the Spanish Grand Prix two weeks ago.

The veteran Mercedes pilot is still confident of his chance to win Sunday. “My situation is going to be pole, start the race in sixth and I’m going to win it. That’s what I’m here for and what I’m going to aim for. That’s all I gave in min mind and the past doesn’t matter at all,” he told the post-qualifying press conference on Speed-TV.

“It is simply a wonderful feeling to set pole after such a long time, and particularly here in Monaco. Okay, it has taken a little bit longer than I might have wanted in the second chapter of my career, but that makes it even sweeter. It’s just beautiful.

“We already thought that this circuit should suit us, and it’s the perfect confirmation of all the work from every team member in Brackley, Brixworth and Stuttgart—a big thank you to every one of them, because this is a team result.”

Red Bull’s Mark Webber was pleased to be starting from the pole on the notoriously narrow Monaco circuit where passing is always difficult.

“Of all places, it’s good to start definitely towards the front here,” he said, “The guys have done a good job, they worked hard on the rest day, they pushed very, very hard. We weren’t too strong on Thursday and obviously didn’t get much running, though everyone’s the same. But the car on Sunday is generally pretty good, so looking forward to tomorrow.”

Things went less well for his teammate Sebastian Vettel. The two-time champion failed to set a time in Q3.

“It was looking very good this morning, but then I think we took a step in the wrong direction and ended up with a difficult car for qualifying,” he explained in an interview on formula1.com. “It’s a bit of a disappointment, as Mark showed what the car can do around here, so we’ll see what we can do tomorrow.

“It’s Monaco and everything is possible here. We could be on a different strategy tomorrow as we’re able to start the race on hard tires, slightly different to the cars ahead, so we’ll see how the first stint goes and go from there. It’s hard to predict, as it’s a long race.”

Schumacher’s Mercedes teammate Nico Rosberg qualified third, .117 seconds behind Webber. “I can also be pleased with today’ he told the rpess conference. “It’s especially great to see how we, as a team, have managed to turn things around from a difficult time the last two races and now be right at the front again.

“It’s just nice to follow all the progress we’re making, moving forward and really fighting hard to improve the car and get the best of the situation—and that’s why today to really be on top as a team in qualifying is great.

“I’m very pleased, obviously, to start on the front row in Monaco. That is a great place to start to have a good race.”

Lewis Hamilton qualified fourth and will be starting third. He said in a team press statement that he had a tough time getting the car to work. “This afternoon was massively tough: one of my toughest qualifying sessions for some time, in fact. And there are two great drivers ahead of me who’ll make it even tougher for me tomorrow.

“I’m fortunate to be one place higher owing to Michael’s [Schumacher] penalty, but we struggled a little today, particularly with the very low-speed stuff. It was difficult to get the tires to ‘switch on’ and give us the grip we needed.

“Still, qualifying was so much fun—I really enjoyed it—and the tires and strategy can play a big part around here. If I get a good start, we’ll suddenly be in fighting position for the win. Anything can happen at Monaco and I’ll give everything tomorrow.”

Romain Grosjean in the Lotus rounded out the top five. “We are not as high on the grid as we wanted to be, but things were very tight today,” he said. “I did a very good lap in the first part of Q3 but then I couldn’t improve on my second set of tires. This was a shame because our strategy was perfect for the last part of qualifying. The traffic wasn’t too bad but I missed out in sector two. I think pole position was within reach.

“P4 is not exactly where we wanted to be but the race will be long. It’s Monaco, it will be difficult; nonetheless we know that the car is quite good on high fuel and with the tires, so let’s see what we can do and put the best strategy into place.”

Fernando Alonso and Felipe Massa qualified sixth and seventh—great for Massa, who needs a good result to ensure his place with Ferrari next season, but not so good for Ferrari, as the team no doubt wanted to do better. Still third row, six-tenths off the leader is not bad for the way Ferrari has been performing this season—maybe the engineers are getting a handle on the new car.

“In Italy there’s a saying: ‘He who goes slowly, goes well and goes far,’ right? Well, that’s what we are doing: step by step we are getting closer,” Alonso told formula1.com. “I am happy with this qualifying, the best as a team that we have seen this season. I have had a good feeling all weekend long.

“Maybe in Q3, we could have shaved a few hundredths off here and there, but I don’t think I’d have moved up any places, given that the driver in front of me is three tenths away.

“Usually here it falls to the top three on the grid to fight for the win, so I think that our realistic goal is a place on the podium, but we also know that surprises are the order of the day.”