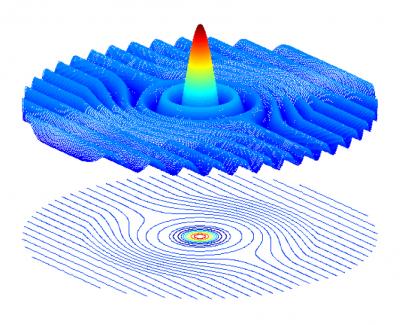 This graphic shows a matter wave hitting a Schrodinger's hat. The wave inside the container is magnified. Outside, the waves wrap as if they had never encountered any obstacle. (Gunther Uhlmann/University of Washington)
Beyond Science

A new system has been hypothesized by an international team of mathematicians that could conceal matter in the form of waves like sound and light.

Called “Schrödinger’s hat,” the name is reminiscent of the quantum mechanical paradox of Schrödinger’s cat and the ability to seemingly conjure up something from nothing.

“In some sense you are doing something magical, because it looks like a particle is being created,” said study corresponding author Gunther Uhlmann at the University of Washington in a press release.

Matter waves can also be shrunk inside the system, although hiding tiny objects “is not so interesting,” Uhlmann said.

“You can isolate and magnify what you want to see, and make the rest invisible,” he explained. “You can amplify the waves tremendously.”

“And although the wave has been magnified a lot, you still cannot see what is happening inside the container.”

By manipulating waves, the team hopes to create a quantum microscope that can capture quantum waves, such as those in the nanocircuitry of computer chips.

Previously, the researchers have worked together on the math behind metamaterials, such as invisibility cloaks, and wormholes, whereby waves disappear, only to reappear elsewhere.

The new system has potential to make different types of waves disappear, including longer ones like microwaves and sound.

“From the experimental point of view, I think the most exciting thing is how easy it seems to be to build materials for acoustic cloaking,” Uhlmann said.

The next step is to build a prototype.

“We hope that it’s feasible, but in science you don’t know until you do it,” Uhlmann concluded.

The findings were published in the Proceedings of the National Academy of Sciences on May 29.