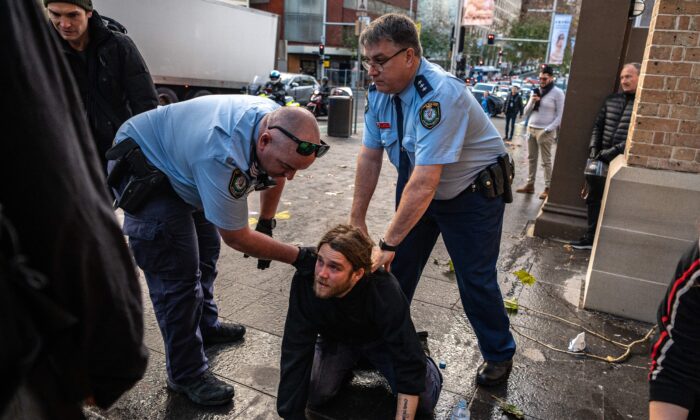 An Australian Liberal Senator has accused the education department of pushing children into experiencing “climate change anxiety,” claiming there is a “strong left-wing bend” across the school system.

The comment comes as radical climate protesters caused mass disruption in Sydney’s Hyde Park after bringing the CBD to a standstill on Monday, aggravating the police force in Sydney and the New South Wales (NSW) government.

Police on Monday arrested ten Blockade Australia protesters, including a 22-year-old woman who used a bike lock to chain herself to the steering wheel of her rental car to block traffic at the Sydney Harbour Tunnel.

Blockade Australia spokesman Jonah Sabtay told the Australian Associated Press that the protests were meant to demonstrate the disruption caused by the “climate collapse,” as he blamed Sydney’s economy for the problem.

“It was almost laughable when you saw the girl that put a bike chain around her neck … to then drink from a non-reusable water bottle and I’m pretty sure she wasn’t driving an EV. So the hypocrisy is alive and well with these people,” she told Sky News Australia on Tuesday.

Hughes, who got into trouble last week for saying the education system is run by Marxists, attributed young people’s “climate change anxiety” to the “woke agenda” across the school system.

She said it’s “dangerous” for students to be told of the assumed “catastrophic impacts that are about to occur on their lives or their futures are doomed.”

“There is a very strong left-wing bend, anyone that denies that either doesn’t have kids at school or aren’t saying what’s happening even with the curriculum.”

The outspoken Liberal senator added that such school content results in students voting for the left-wing Greens when they leave school.

Labor MP Matt Thistlethwaite echoed Hughes’ sentiment on the Blockade climate protesters’ disruption but disagreed that the group’s actions are a result of the school system.

“There’s absolutely no evidence of that at all,” he told Sky News Australia, “I see from the teachers that are teaching my kids in the community that I represent that they work very, very hard.”

“I think that you and your party have learned the lesson from the election and that is that Australians do want stronger action on climate change. They want greater integrity and politics and women want more rights.”

In response, Hughes said while many people consider climate change actions very important, “a lot of people don’t want to pay for it either.”

“We could have affordable, reliable baseload power through a renewable system. That’d be great. But the technology just doesn’t exist and no one is being honest and upfront about that.”

“It has to stop, the police are out in force today and they’ll make the arrests and my expectation is they will face the full force of the law,” he told Sydney radio 2GB.

“I’m furious. The public are furious,” he told the Nine Network.

“Resistance will continue. Blockade Australia will again take to the streets tomorrow, to continue disrupting Australia’s destruction where it began,” he said in a statement.